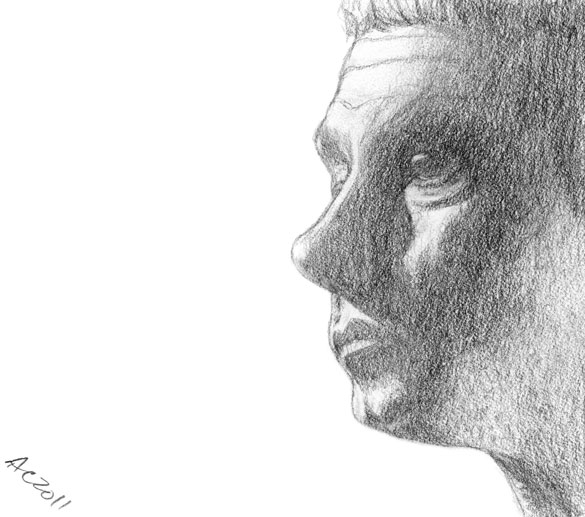 During the opening of the first episode of the BBC’s new Sherlock, there’s a scene of John Watson sitting, back straight, staring blankly out into the darkness of the room. I wanted to try to capture that moment here, and so I found some screencaps and drew up this rather detailed sketch.

It’s funny how many little details it takes to make a person recognizable — after the first draft, I scanned the sketch and laid it over the original screencap in Photoshop and looked at all the little places that needed to change. The curve of the nose and chin, the angle of the lines of the forehead, the placement of this shadow and that highlight — nothing big, but once I went through and made the changes, the drawing coalesced from ‘a random guy staring off into space’ and into what, at least to me, is recognizably John (as played by Martin Freeman).

I admit I cheated a little when I scanned him in the second time and gave him a much bigger expanse of space to stare aimlessly off into than he has in my sketchbook (not to mention cleaning up all the finger-smudges in the white). I wanted to give a sense of how the image was in the show, which was incredibly well-shot with gorgeous composition and cinematography throughout.