This isn’t really a detailed recipe so much as an outline of a recipe that you can fill in with whatever flavours you like. So far I’ve made a nice spicy curry, a lovely sage and oregano version, and a delicious sweet-savory Moroccan spiced stew.

As a disclaimer, I’ve been making and eating this mainly for the nutrition, so this is specifically an easy, cheap recipe that I can give variety to, freezes well, and is high in iron.

I have no idea how veggie-friendly it is, though I would assume very. I use meat to add protein and flavor, and I assume someone who didn’t eat meat would have something else they use for that purpose. Also, there are no onions in it because I hate onions, but you do what you like.

Brown the meat if it needs it, then add the carrots, lentils, flavorings, and broth/water. I found that about half and half made a nice rich soup without overwhelming whatever I was making with the broth. I used the instructions on the lentil package for how much liquid (and then added more for the carrots etc) and how long to cook everything.

I add the spinach near the end so it stays as happy little green highlights without dissolving into the broth, but still gets hot.

I serve this over brown rice when I’m feeling virtuous, or white rice when I’m not. It’s very filling, and as tasty as you make it. However salty it tastes in the pot, btw, the rice will suck a lot of that away, so I always end up taking a bit of extra salt to the table to make up for it. 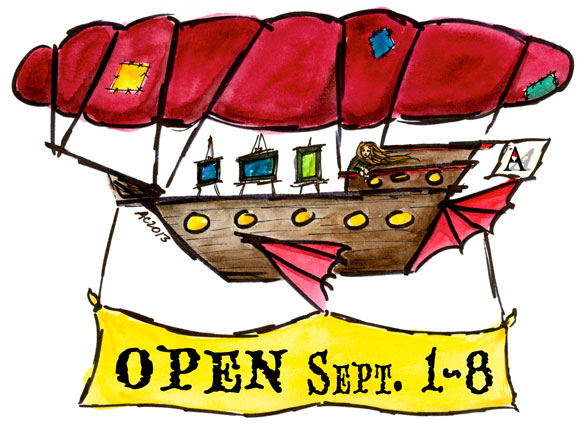 If there was any art you were hoping to sneak in and buy at the last minute, now is that minute! Email me if you’ve got any questions, or just go admire the pieces one last time before they’re gone.

Where the Wild Artists Go

The Floating Gallery is going to pull up stakes and float away at midnight tomorrow night.

I sketched this little map to amuse myself and you. Are you amused yet?

Strings of glowing fireflies flit in the distance through red-tinted dusk in this abstract piece. The night is slowly banishing the last hints of color, but for now the fireflies still eclipse the stars. There’s a dreamy, gorgeous feeling to this painting, with its metallic-bright firefly spots and softly textured ruddy end-of-sunset background.

Above, you can see the texture of paper and paint, and the soft glow of golden light that seems to float above the surface. Below, I’ve put the piece in a frame so you can imagine it like staring out a window into some fairy world where it’s always dusk, and sailors always delight in the red sky at night.

Inspired by this ridiculous gif, I felt the need to do some Minions all on their own. I swear I was going to start holiday cards, but I couldn’t resist! I suppose you could put some mistletoe above him and call it a Christmas card, heh.

I thought he was too plain all by himself, so after I penciled in the giant MWAH! I decided to add some extra Minion shenanigans across the top. My favorite is the one sticking is tongue out, of course.

You can get one to send to all your friends here at my Etsy shop.

A Series of Uncanny Fears: Behind You

A Series of Uncanny Fears: Behind You
pen and ink art by Amy Crook

Tentacles have crept their way into A Series of Uncanny Fears! It only took me 3 pieces to do it, predictably. This is the first one with an explicit person in it; there’s a lump in the bedclothes and a handprint on the mirror, but we finally see someone’s actual hair here. I was torn at first about putting someone in it, but I think the little bit of humanity peeking up over the edge of the spiral-patterned chair adds to the neck-ruffling feeling of creepiness.

A Series of Uncanny Fears: Behind You, detail, by Amy Crook

Above, you can see an update of the creeping tentacles and the backlit head of unruly hair that is their goal. Below, you can see the piece in a frame with its brethren. I hope to add two more pieces to this series next month, too.

A Series of Uncanny Fears, 3 pieces of framed art by Amy Crook

I have found a most excellent way to help stave off the afternoon sleepies! This won’t work for everyone, because not everyone has a cat who deserves this sort of treatment*, but it works for me.

First, I find Pod** where he is sleeping on top of the cat tree. Then I acquire him, protesting, and carry him to the bedroom, where we lay down in bed and have cuddles of dubious consent. He purrs and rubs his head into the petting and then leaves as soon as possible, but it’s a very nice restful, quiet minute or two.

The funny thing is that now, after doing this for a while, he still makes his break for freedom, but after a moment of staring out the window to make sure the squirrels and/or crows aren’t in attendance, he comes back. Having proven that he is above the cuddles, he demands… more cuddles.

It’s a really nice way to get a bit of rejuvenation in a short period of time, and also harass my cat. Who deserves it.****

*I don’t do this with Belladonna, because she is not a fucker who deserves naptime interruptions, and also doesn’t enjoy it as much.
**His actual name is Pteropodidae, in case you were curious.
***Horribly misquoted from Winnie the Pooh
****No, seriously, he’s a total fucker when he’s awake.

PPS – Yes, this is what it’s like in my brain, aren’t you glad you get to see more of it?