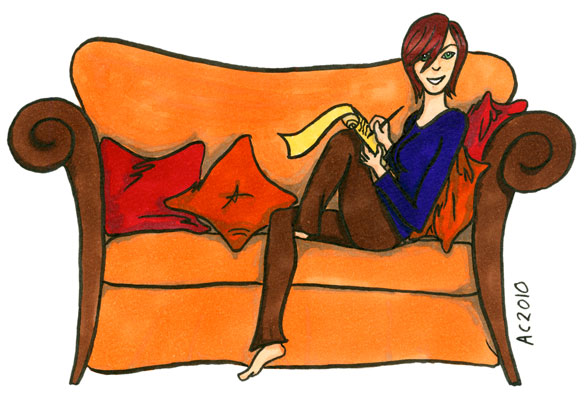 When Linda and I talked about colors for her cartoons, she asked for greens and olives to match her website, but she added a little postscript saying that if she had her way, it’d be eggplant and tangerine! So I suggested we do one of each, since she’d already decided to keep both.

I had this great light orange marker that made the couch surprisingly warm and inviting, especially when we added the rusty orange and blood red pillows, but managed to be subdued enough not to overwhelm the figure entirely. I gave it nice dark wood to frame it, and then Linda herself got to wear the deep purpley-blue that was as close as I had to a proper eggplant.

All in all, though it’s the same person, her first cartoon will serve her well on her website and in a more professional capacity, while this one gives her something fun and unexpected that still has ‘her’ written all over it. 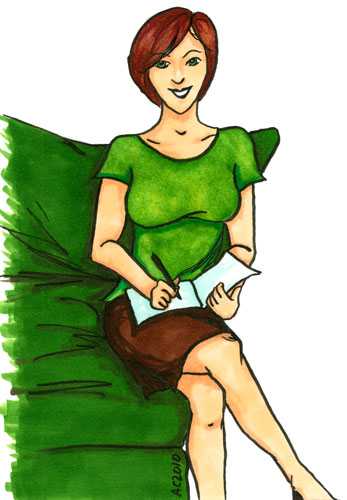 When the wonderful Linda Esposito of Talk Therapy Biz took me up on getting herself turned into a cartoon, I’m pretty sure she didn’t expect to get two! The one she asked for was the one above, something in greens and browns with a professional feel to it to complement her site. When I was actually doing her sketch, I couldn’t find her email at first with the pose request, so I doodled up an entirely different cartoon of her (I’ll post that one tomorrow) before digging up the “right” pose.

I couldn’t resist showing her both ideas, though, and I was thrilled when she decided to get cartooned twice! She’s been wonderfully patient with this summer’s mad delays, and I’m really happy that she’s finally got her cartoons to show for it.