A mysterious woman joins with the tide, dissolving into seafoam until all that’s left is the golden crown of flowers. Her long, dark hair makes a veil that matches the curving waves, while her pale face echoes the moon above, and her dress matches the whitecaps around her.

The scene is painted on a textured artists panel about 3/8″ thick, with a hanging-ready niche in the back if you don’t want to frame it.

One has to wonder, looking at her pink mouth amongst the midnight blue, whether she’s a ghost, a siren, or merely a woman scorned.

Above, you can see the mysterious figure in her golden crown of flowers up close. Below, the piece is all ready for hanging sans frame, so it’s just waiting on you to take it home. 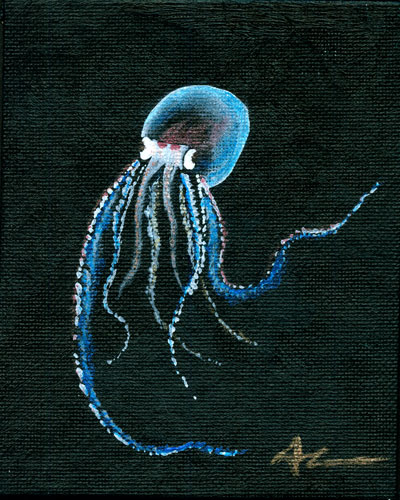