June is just around the corner and now’s a great time to become my patron on Patreon! Here’s last month’s sketches, all of which turned out to be bookmarks for various reasons.

Roxanne asked for “Winter Soldier” and I gave her a chibi cutie. Kim wanted “mist” so I experimented with my watercolors for this beautiful, mysterious tower. Eric asked for my cat Pod as Morgana from Persona, with a special nod to his bagel-thieving ways. And finally, Jeff asked for “giving in to temptation” and has been enjoying the new Twin Peaks, so he got the inevitable donut cartoon.

It’s Caturday – a wild Pod appears! Only this time he’s been evolved into a Russian Blue instead of his usual sleek black, hence the name.

Podovich is curled up in a fuzzy ball with just one pink ear to break up the soft, inviting grays. The white pillowy surface he’s sleeping on carries just a hint of shadow, as of course he’s found himself someplace flooded with light for his nap.

That must be why he’s got his paw over his eyes.

Where in your life do you need a kitty to remind you of the value of catnaps?

Above, you can see the little details of fur and ear and one closed eye not quite hidden completely. Below, Podovich is napping in a frame, safe and content.

I Am Not Here to Please You

I Am Not Here to Please You, 12″x9″ pen & ink, Copic marker, and watercolor on Strathmore bristol for The Doubleclicks video “Women Know Math”

The Doubleclicks got 50 women and non-binary artists to illustrate their amazing video for Women Know Math, and I got to be part of it! I am absolutely in love with this song, the video, and everything it has to say.

Although they licensed the art for this specific use, the original is up for grabs in all its cat-filled glory. A rare self-portrait by the artist, with special guest appearances by Podsworth and Belladonna, this drawing bursts out of its boundaries with glorious movement and joy.

I Am Not Here to Please You, detail, by Amy Crook

Above, there is possibly the most accurate drawing I’ve ever made of Belladonna, and some pj pants I only wish I owned. Below, you can see this drawing framed, including the very faint pencil reminder up in the top portion with the text I was meant to using.

I Am Not Here to Please You, framed art by Amy Crook

Putting a bow on a sleek black cat might seem like a good idea, at least until you find out how the cat feels about it. This big-eared beauty is modeled after my own black cat, Pod, but has beautiful crosshatching in place of fur, giving it some gorgeous graphical detail to go with the bad attitude.

This intricate drawing is perfect for someone with a great sense of humor and a special love of cats — even the ones with murder in their eyes.

Above, you can see the intricate detail in Pod’s unimpressed face, the crosshatching and hand-texturing of his big ears and beautiful bow. Below, Podzilla is contained in a frame, ready to bring sarcasm to some lucky recipient.

the view when I came to bed

This cat came to me in November of 2008, two weeks after Halloween*. One of my design clients found him outside her office, took him to the vet for tests, and then started driving to my apartment before she thought to call me and make sure I wanted a kitten. His full name is Pteropodidae, the family name for fruit bats, because of the giant ears. He is of the cat clan McFucker, always getting into things and perpetrating fuckery on my other cat, Belladonna. If you’re a cat person, you know the type.

Pod’s nicknames are legion, including Poddles, Poddleston, Poddington, Podsworth, Podling, Butthead, Stinkerbelle. He’s got sleek, silky fur that makes excellent hairballs, and the skinniest tail I’ve ever seen on a furry cat. He’s never found a dairy product he doesn’t like, and he’s very vocal if he thinks he hasn’t had enough cheese today.** He’s the one that cuddles up to me in the night, so I wake up to find he’s made himself the little spoon, all snuggled up in the curl of my body. He will tuck himself into the bed for his afternoon nap in protest of inclement weather, which is what he was doing when I took the above photo.

Below, you can see him on the first day he was here. It took him all of an hour to start drinking out of my water glass, because he is a fucker. But I love him, and he’s good*** for Belladonna, who is grumpier but less tubby since she got someone to chase irritably around the apartment. 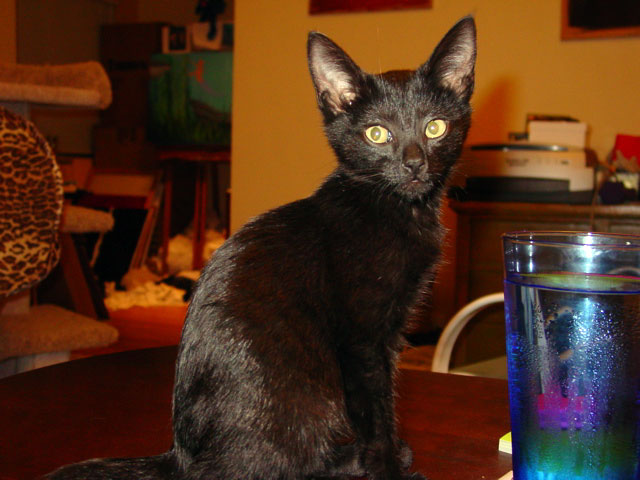 just look at those ears

* we’re pretty sure he was someone’s unwanted Halloween present, he was very tame and the vet said he seemed abandoned and starving rather than feral

** there is no such thing as enough cheese

*** for certain values of good

It’s Friday the 13th, and Pod wanted to have his portrait painted, from his tentacle tail to his pink jellybean toes. He’s feeling very elegant and refined here, so clearly I’ve taken liberties.

I put him on a card with the message, “Make Your Own Luck.” I felt like in this picture he was saying something rather superior, so you can add whatever tone pleases you.

Make Your Own Luck greeting card by Amy Crook at Etsy

This little commission was done for a request of John & Sherlock playing with my kitties, so Belladonna (left) and Pteropodidae (right) go to take a little trip to Baker Street. Bella’s fully recovered from her tooth drama, and has found John a comfy, warm place to look annoyed about being petted. Sherlock has, predictably, decided to experiment with Pod and a laser pointer (he also refuses to call Pod by anything other than his full name).

All in all it was fun do draw cartoon versions of my kitties, and of course I always enjoy John & Sherlock.