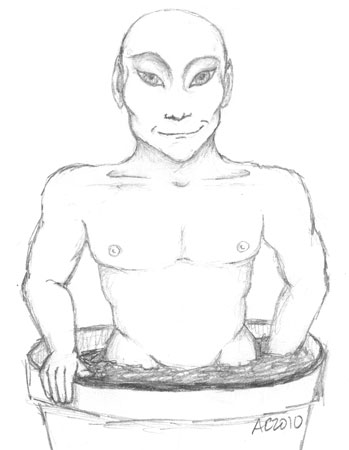 Today’s sketch is a character from an original story I’m working on, an earth elemental named Adam. He’s got the ability to disappear into a pot of earth and reappear out of another one elsewhere, traveling through his element. He’s only about half a meter tall, and quite wide and stocky for that height, with no hair to speak of, or a belly button, which I had to remind myself of because I kept wanting to put one in. It’s an interesting challenge to draw a character who’s humanish without being actually human, because the urge to correct this or that is hard to resist!

I’m really working on my perfectionism with this one, because as soon as I scanned it I could see things I didn’t like, but sketches like this aren’t really finished pieces, so I left it as is.

2 Responses to “Adam the Earth Elemental”