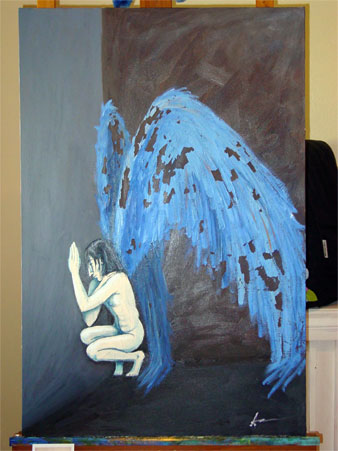 This piece is mostly done, but then, I thought it was complete many years ago, too. Through some trick of chemistry (I have my suspicions, but there’s no real way to know now) the paint began to flake off, foreground from background in big crackling curls. After a lot of contemplation, I decided I really liked the effect on the wings, but it didn’t go well on the figure — and I like to think my figure painting skills have improved since the first round.

I tried to think of a more original title for the piece, but I always think of an angel cast out of heaven, slowly decaying in the trap he’s fallen into, piece by piece. He’s losing his divinity, but hasn’t quite fully stepped into our reality, either, lacking the warmth and depth of a person.

This is the original painting, after the damage was already done:

I flaked off everything that would come from the figure, and then painted him out completely. I also took clear transparency blender (essentially paint with no pigment in it) and went over all of the wings with it, which has helped to stay the decay and keep what’s left stuck to the canvas. 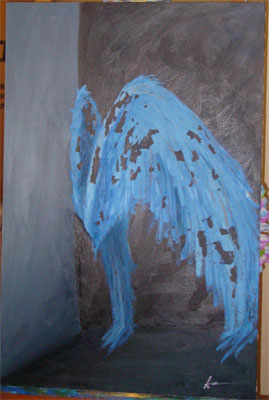 After that all dried, I began to paint the figure back in, using a more sallow skin color than before. 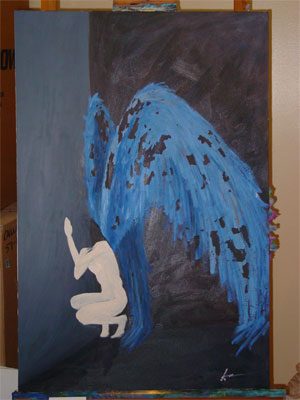 Finally I painted the shadows in a blue-black to give the figure the feel of an underpainting, with some subtle white highlights on the pale skin. Now it’s got to wait 6 months to a year before I can varnish it, which will be a new experience for me. I think the first photo has the truest color, but this one shows a few last-minute adjustments I made. A painting’s never really done until the brushes are washed and I can’t fiddle with it anymore. 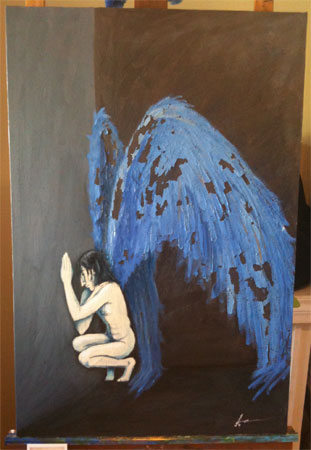 « Roots of the Earth