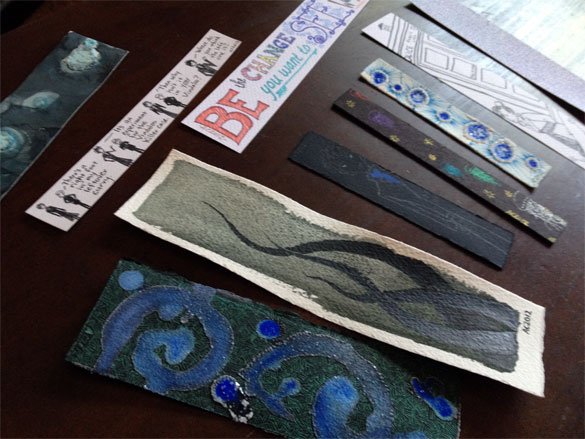 I asked one of my darling patrons what I should post about today, and he asked me a really easy question: Why bookmarks?

I’m sure he was expecting some deep answer about my love of books or the utility of art, but in all honesty, it’s really simple. I often have little strips of paper left when I’m tearing or cutting down larger sheets. Since I’m a total art supply hoarder, I’ve kept some around (and more since I started doing Bookmark Weeks), and one day when I was on the phone for something, I pulled one out and started doodling on it. It’s a fun way to mess around on a small scale with lowered expectations. I sell the results for a relatively low price, so that way people who can’t afford one of my regular paintings or drawings can still have a wee Amy original.

Plus, now I feel all virtuous when I save weird little scraps of paper.

For the curious, I’ve got 4 new ones done, so there’s only 3 more to go before I can slack off real posts and do another Bookmark Week for your enjoyment. If you’re on Twitter, keep an eye out for a preview tweet one of these Sundays — I ended up pre-selling a couple of them before the posts even went up last time. There’s only two left out of the previous lots, some tentacles and the very first one I ever posted. 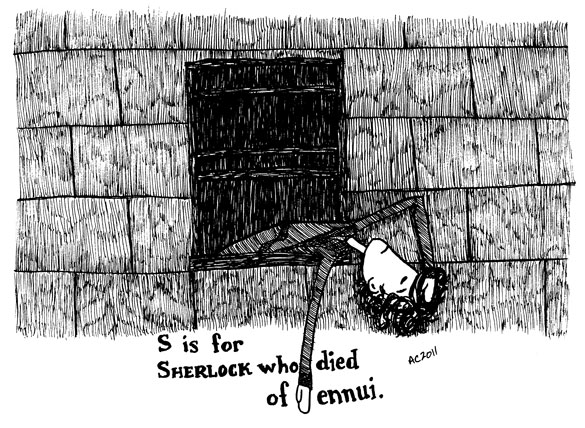 I’ve had some time to think about this question since I was asked at the STUDIO Gallery reception (the show’s now over but it was wonderful to be a part of it), and I’ve come up with some answers that are probably true some of the time. Your mileage may vary.

First off, tentacles are fun. I’ve said this before, but it’s probably the top reason I keep up with the series, just because I really enjoy doing it. The scribbly ones are fun to draw, the painted ones are fun to paint, and there’s still new things I can do with them that I haven’t done before.

Now that the shallow answer is out of the way, we can dip our toes a little deeper, though in the end the answer is still about fun. What can I say, I’m a fan of fun.

Being scared is fun.

It is when you know it’s harmless, anyway. And it’s wonderful to explore the edge where scary meets something else. I love things that are morbidly funny, frighteningly beautiful, or creepy-cute, just to name a few. It’s those ragged edges where tentacles are gorgeous and otherworldly and creeping into our thoughts like, well, tentacles, that keeps me coming back not just to the Tentacle Deeps series, but to weeble Cthulhu and logos with skulls on them and pendants of spiderwebs.

Real-life spiders give me the willies, but art that makes them fascinatingly lovely is amazing to me.

I enjoy taking people to that place where you go, “Huh, I never would’ve thought of that.” I like creating something that is, let’s be honest here, not just another fucking landscape. If I’m going to obsessively detail anything, I want it to be something interesting, fascinating and maybe even a little bit repellent, something funny or charming but also morbid and grim.

It may be that that narrows my audience to a very small sliver of people who, like me, enjoy seeing the horrific beauty in the tentacles that slide up from the depths for purposes unknown. But you can kind of guess they aren’t savory, that these strange alien arms reaching upward aren’t straining towards the surface of our world, our pond, our imaginations, for anything that’s good for our health.

But then, since when has anything that’s really fun been all that good for your health? 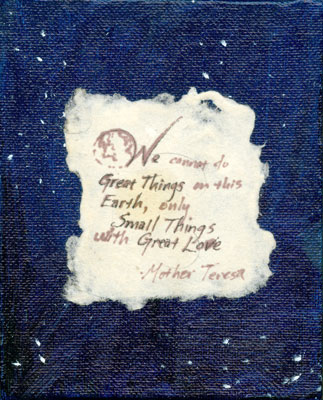 I make paintings as small as 2.75″ square, and the vast majority of my work in the past couple of years has been 5″x7″. Nothing that takes up much space on a bookshelf, let alone fills a whole wall.

I think life is in the details. There’s grand, sweeping panoramas and grand, sweeping gestures and big harry audacious goals, sure. But there’s as much beauty in a single leaf or flower petal, in paying for the person’s toll behind you, or in crossing an item off your to-do list as there is in the big things. People overlook it, just like the introverts get overlooked for the extroverts, but that doesn’t mean it’s not there.

Don’t get me wrong, sometimes you’ve got to set audacious goals, but in the long run the success or failure of the big things depends on crossing all the little ones off your list, one at a time.

I like the physicality of working small. Though my masseur and my eyesight might disagree, there’s something very satisfying to me about drawing Many Tiny Lines, or using the Smallest Brush Ever. It’s one of the reasons I love my salt paintings, because they’re filled with miniscule details that sort of make themselves, and then beg for me to add to them or work off them or just appreciate them.

It’s micro-chaos being turned into something beautiful.

This isn’t that thing about the butterfly in Asia making Tornadoes in the Midwest, either. Small things are just that, small, but it’s what they can do that interests me. The effect of one cheerful smile in a sea of frowns, of holding the door for someone with full hands, or inversely of shutting the door in their face and leaving them to flounder.

Putting something unexpectedly beautiful somewhere that you have to notice it makes it more of a surprise, makes the smile linger a little longer. I absolutely adored the 365 Jars project, even though it never wrapped up, because it brought small, surprise art into so many people’s lives.

So, really, why small?

For all those reasons above. For practical reasons, because it’s easier to finish in time for daily posts, and it’s easier to store and ship and frame.

But most of all, because it works for me. The path from inspiration to art is smoother for me when I work small, because tiny work with details you have to peer at to discern just flows better than big, bold, and obvious most of the time.

And yeah, I’m a lot like that with people, too.