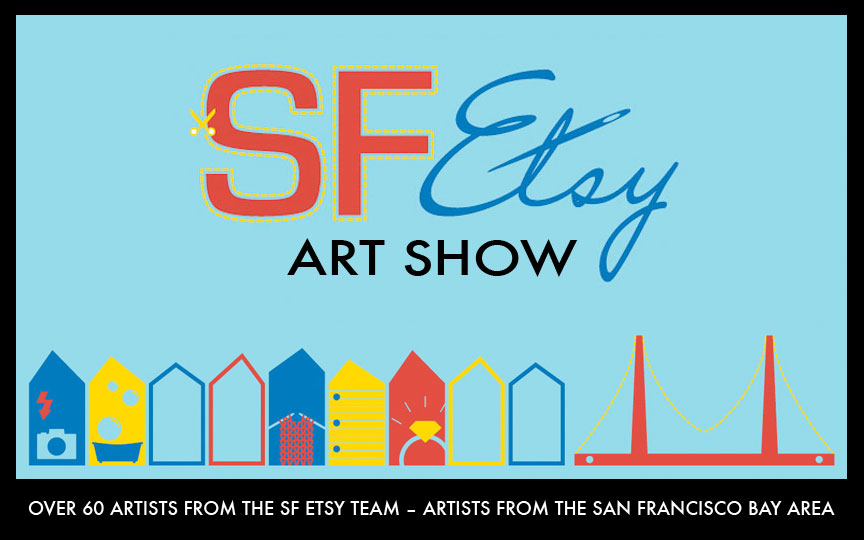 I’m in a gallery show! It’s all very exciting. It opened technically yesterday, but the reception is Saturday, May 12 from 2-6pm, so you should totally come! Yes, you.

Oh, right, you live on the other side of the country. Well, okay, you’re excused, then.

But not you! You’re just going to have to come.

I have four pieces in the show, which is a big group show with over 60 artists from the SFEtsy Street Team. You can see the details here, and hopefully you’ll find the time to stop by and maybe even the money to buy a piece or three. There’s a wide range of prices, media and themes, which I’ll get to see at the reception I mentioned.

Yay, gallery show! In a real, live gallery! I’ll see you all there, right? Right.

I actually took the time to trim this cool green cardstock down to size, so it fits just fine in a 4″x6″ frame. I realize I have a ton of frames that size, from when I was trying to get the handmade postcards to fit. I finally gave up and started matting them into a bigger frame, so I’ve got a bunch of extra frames that obviously need tentacles.

The background is pure zoisite green, granulated and squamous just the way I like it. The foreground tentacles are a blue-black that gets bluer as the tentacles “recede” into the translucent background layers. I like the extra dimension the piece gets from colored paper and colored tentacles as well as the usual colored background, the whole thing is sort of eerie and otherworldly.

The color in the above close-up shot is a bit off, my camera keeps trying to add red to correct the green, but it’s still cool. Below you can see it with my iPhone for scale. I always think it’s neat seeing the art reflected in the surface of the phone, even if I don’t love the reflections of the room in the glass on the artwork. 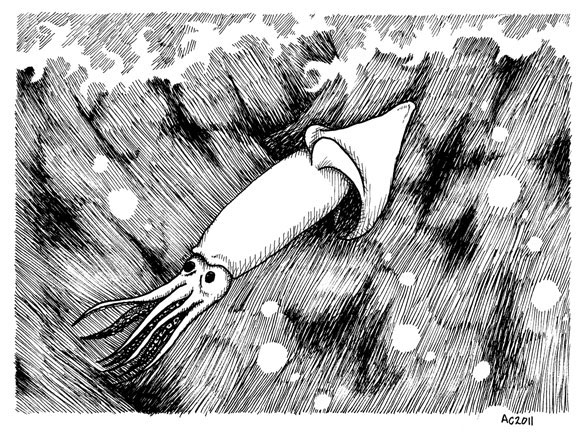 The watery environs of this squid were directly inspired by the cover of The Raging Tide: Or, the Black Doll’s Imbroglio by Edward Gorey. I didn’t even realize it was out of print until just now, though, oops.

I’ve been wanting to move away from doing just Sherlock cartoons in this style, and so I went to one of my other dorky fannish loves, cephalopods. This little squid looks like something unfortunate is about to befall him, which seems appropriate for something done in Edward Gorey’s style. Perhaps the black doll will come falling through the water, or maybe the squid will be called upon to help fill out another set of childhood obituaries. “G is for Gretchen, pulled down by a squid,” perhaps?

You can also get this piece printed on a handmade card on Etsy. 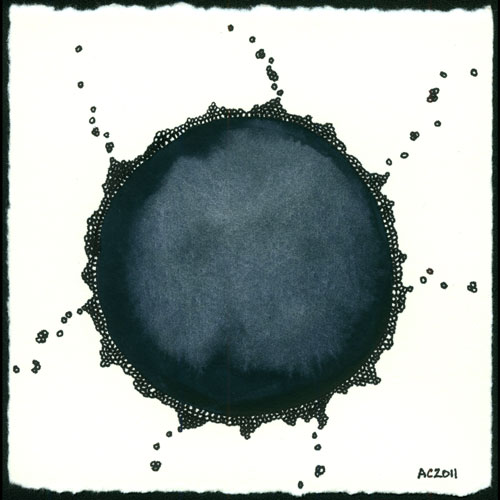 I finished this little piece and then had to let it sit overnight to think of what to call it. The central circle initially put me in mind of a moon, or a planet, or possibly a pirate’s black spot when it was all by itself, a dark blue-black shadow of painted ink that dried to a gorgeous matte finish.

Then I came in days later and decided to add the little clusters of circles around it in black fountain pen, knowing that the ink would blur and spread as I made the little circles, adding texture and shadow. As I built up the outside texture, it reminded me of a decorative border, or a cluster of marine eggs, or possibly a layer of industrial growth around a planet, building up and sending off pieces out into the space around it. Or perhaps floating down from the white to aggregate, giving life to the lifeless rock in the middle.

Above, you can see a close-up of the tiny little circles that make up the pattern of growth, pushing off and away from the central mass. Below, you can see it in a narrow-edged frame with its brand-new sibling, and my iPhone for scale. 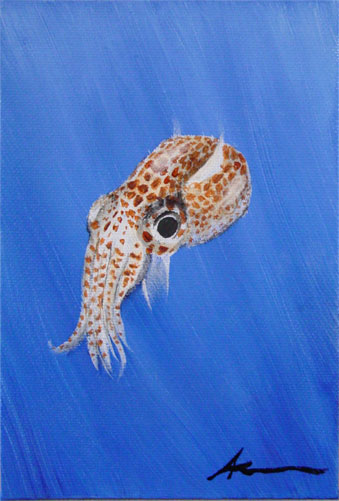