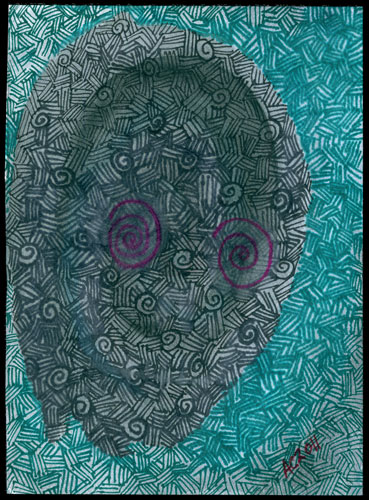 This piece was born out of pure play. I first brushed in a spiral in watery black ink, and then I watered the ink down even further to make lighter and lighter greys to play with. I also added in a tiny bit of color here and there, which is almost completely obscured by the later crosshatching. Then I used a green fountain pen to crosshatch around the main shape, starting while the paper was wet and letting it dry as I worked, so some of the lines are more blurred than others.

Then I wet down the central area all over again and used a black pen to ink there, and when I was done, the whole thing reminded me of one of those elaborately decorated Day of the Dead skulls. I got my dark red fountain pen (which the scanner decided was rather more magenta than the real thing) and drew spiral eyes, and then signed the piece using that red as well.

The end effect is rather creepy, but as I’m fond of creepy, that works out well.