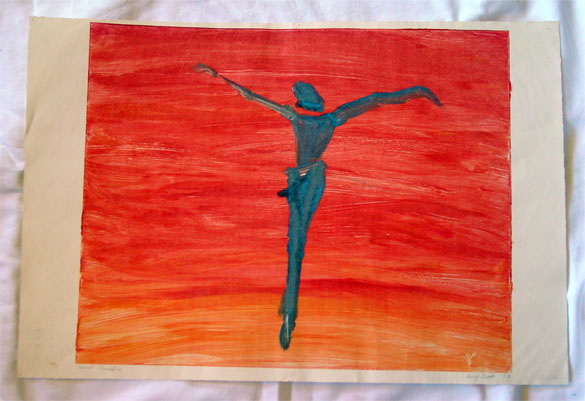 I’m always frustrated by how hard it is to get beautiful, intense blues and reds to shine through in an electronic image. This monoprint retained a lot of the brush-stroke feel of the original plate, only slightly softened by its trip through the printing press.

This is my favorite of the small series of cruciform images I did at the time. It has an intense burst of sunset color with the rich, calm blue floating above it, almost like someone floating on a pool of water. There’s a real sense of peace and spirituality to it that suits the season. 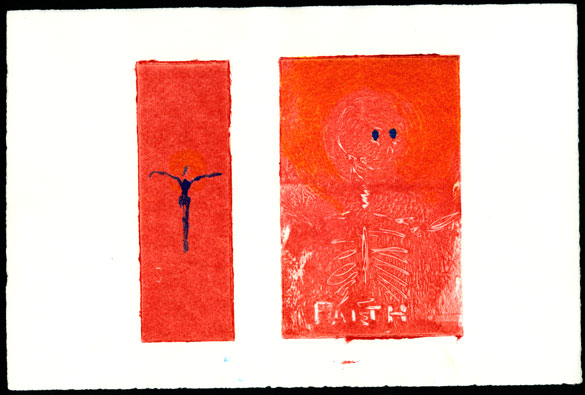 This is the match to Faith I, this time with extra details done in rich primary colours. The blue cruciform figure floats in its own smaller field, while the close-up reveals the morbidity of the everyday image of faith. In addition to the rich blue there’s a subtle gold halo around the figure, done with color this time instead of scratching away.

There’s a lot to think about from this starting point, and a lot to be said, but it’s all difficult to approach without offending someone. Art can often open a dialogue where words fail, though there’s still a conversation to follow up, whether in words or images. 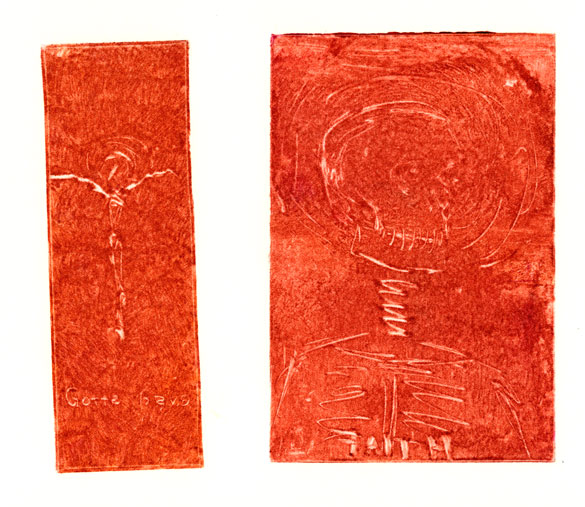 Faith I by Amy Crook

This is another in the series of cruciform prints, this one done in pure red with a mix of monoprinting styles — the textured red background is etched haphazardly with the images and words to create an image out of the chaos. I did two very similar to each other, and will post the second sometime next week.

This piece is the start of a deeper dialogue about faith and what it means in our society, the connection between worship and the fear of death. I’ve noticed very sharply lately that faith seems to grow as people get older, and I think this older piece still speaks to that phenomenon, among others. 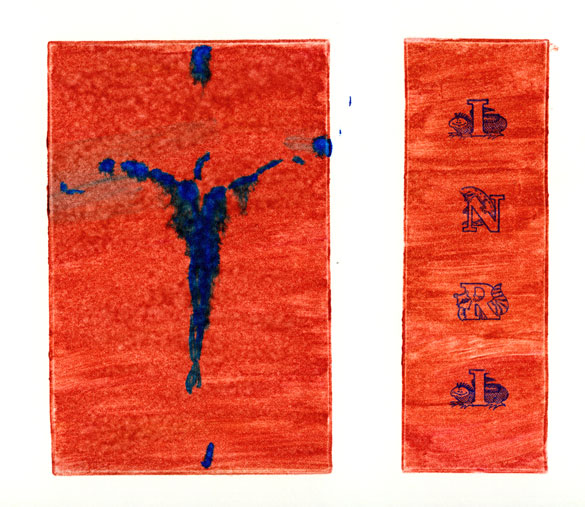 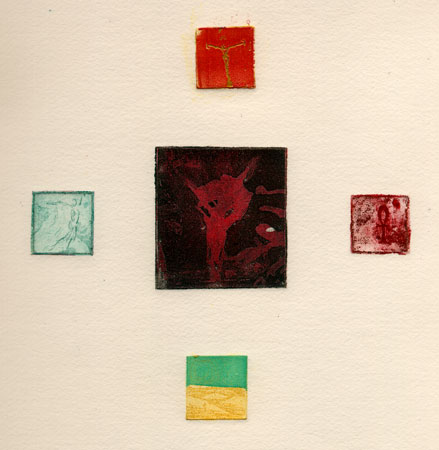 This is another print that combines tiny etching plates with double-inking to make a unique print. The 3 images in the middle column were all inked once, wiped clean,a nd then inked carefully a second time to give them a duochrome look, while the two plates to the left and right were inked just once in the same pure colors that are used on the others. Really there’s four colors present: blue, yellow, red and black, very primary.

Each plate has its own symbolism that, when combined with the others, invites the viewer to construct their own narrative. Do your eyes start in the golden sand dunes, or up with the floating cruciform figure? Do you puzzle out the dancer on the left first, or the ankh on the right? The central image is completely abstract, drawing the imagination to fill in why it’s surrounded by these other, smaller satellite images. 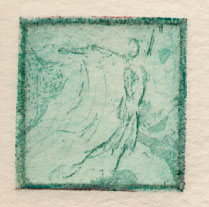