Another Man’s Octopus, a Sherlock Holmes comic by Amy Crook

When I was contemplating ideas for today’s Tentacle Tuesday, this idea came to me (undoubtedly influenced by the steampunk novel I’m reading) to draw the original Holmes and Watson. I borrowed the fashions from one of the old Paget illustrations, so blame him for Holmes’ weird little jabot, and then added in our random steampunky science nerd and of course Biffy, the friendly octopus. He just really likes Watson’s moustache, I feel. It’s quite dashing.

I decided to shade it all in warm greys to give it the feel of an old Victorian daguerreotype or something, which always runs into the question of whether I should color the skin of the people or leave them white as the paper. I compromised by making Holmes very pale indeed, and giving Watson and the scientist a bit more robust warmth. This kind of coloring takes a bit less time than proper color, as the limited palette simplifies things.

Above, you can see the line that made me decide I absolutely had to draw the comic, along with an unimpressed Holmes uttering it. Below, they’ve made it into a frame with my bored 5-armed plushie and one of the original books.

Sherlock in Grey
by Amy Crook

I wanted a tall, thin piece of Sherlock art to put on my giveaway bookmarks for my Etsy shop (sometimes I slip them into the larger orders as a freebie), and nothing I already had quite fit the bill. So, I drew this guy! He’s done with one of my nifty Japanese brush pens that’s black on one side and grey on the other — I’m always using up the black and leaving a ton of grey, so sometimes pieces like this can help me use up some of the extra. I self-indulgently drew in his red buttonhole, though I’m not sure anyone but me will notice it when it’s printed out half the size.

I also used him on my Sherlock gift tags, complete with characteristic sarcasm.

The purple tentacles reach up through a grey sky, trying to capture the stars and align them to their whim. And now Tentacle Deeps is old enough to drink! Happy Tentacle Tuesday, indeed.

I’m not feeling well so, no framed photo, but the simple black wall frame I’ve got for it will look great. 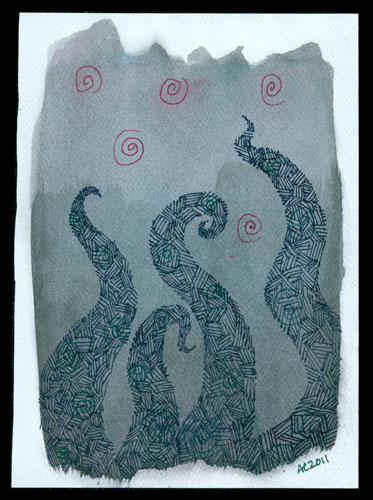 Yet another installment of tentacles, this one exploring a couple of different techniques than the previous three.

I got the paper itself damp this time before doing the greyish wash, and then dripped in a bit of colour here and there to add dimension to the grey. Then I washed again over the whole paper, which muted the bright white borders and caused some but not all of the wash to bleed around the body of the image. Since the paper’s recycled, there’s also a bit of colour bleed-through from the inkjet printing on the back, which is covered by the darkest part of the wash but still adds some depth.

Then, once it was dry, instead of painting in the tentacles, I got out a blue-black pen and used obsessive crosshatching to create them. It’s always interesting and rather haphazard to create shapes like this freehand out of texture, without the comfort of penciling things in first, so the tentacles seem a bit less graceful to me this time around, and there’s no second or third layer of faded background shapes. Instead, I used a dark red to highlight the red blotches in the wash, and then slipped dark green spirals subtly into the tentacle shapes themselves — you can click on the image to see it bigger, which lets you really see all the details. 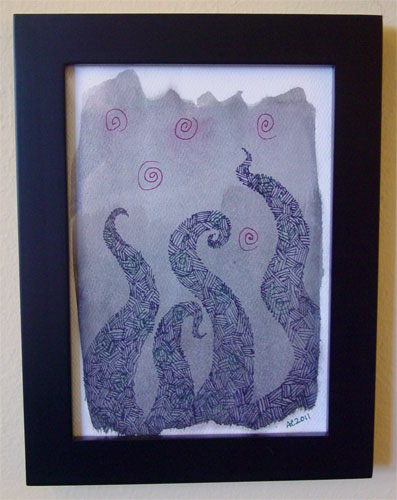 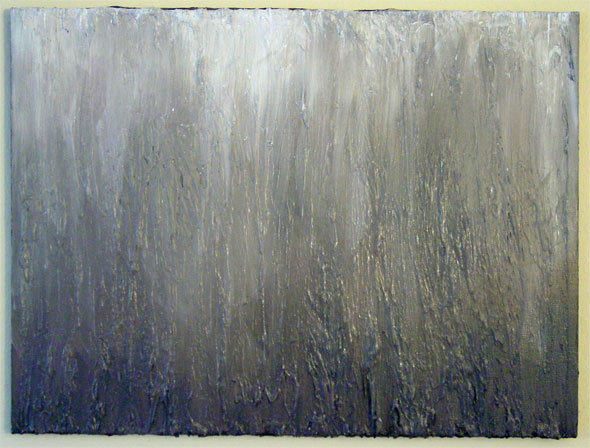 This is an old piece that’s gone through a number of permutations. This version feels very much like a cave to me, with light coming in from above, and textured stalagmites growing up from the bottom to meet with the stalactites reaching down from the top. The painting is as much textural as visual, with very little of the canvas peeking through all the thick paint.

The edges have been painted black, so it’s ready to hang without a frame.