After doing all three of the new Doctors, I decided that Captain Jack Harkness needed a card of his own! It’s sort of a get well card, but could really be used to cheer up anyone who’s a bit down. Just don’t try to use it as a sympathy card.

I did, you will notice, get his cheeky wink this time.

Not Dead Yet, detail, by Amy Crook

Above, you can see a detail of his face, from cheeky wink to cleft chin. Below, he’s in a frame with a naughtily borrowed Sonic Screwdriver, and my iPhone for scale of course.

Not Dead Yet, framed Doctor Who fan art by Amy Crook

Naomi’s Jack, and her Monster 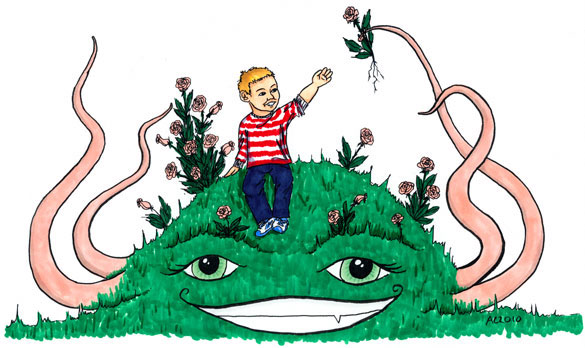 Back in May I offered three slots to draw people’s Monsters, so I could by Havi’s Monster Coloring Book. It’s taken a while to get both of us connected (she’s a busy one!), but I finally have the third one done, for Naomi Dunford of Ittybiz.

Naomi didn’t have a specific Monster she wanted colored, so she sent me some pictures of Jack and we talked a little, and I did a sketch for her of this friendly little hill monster offering Jack a pink rose (Naomi has a thing for pink roses. Who knew?). It took a while to get it from idea to finished product, but I love the cheerful green and pink result, a non-creepy monster for her to hang on the wall.