Something bright and cheerful for your Monday, whether you’re working or have a day off like many Americans. I’m putting a selection of the new pieces on the blog this week, but there’s even more art at the Floating Gallery and it’s only available until next Sunday!

I had a piece of 10″x8″ watercolor paper that I made a background on in bright yellow, green and darker green, using a spray bottle to make the fascinating layered shapes with their fractal borders like fjords. I used pen & ink on this piece a bit haphazardly at first, and what I ended up with was a work of art that just wasn’t working with itself. So, I girded my loins and got out my tear bar and tore it in half, then took a bit off each piece to end up with two 5″x7″ works of art, and a couple of bookmarks. All of the pieces then got some more work, and Edges is one of the results, the right half of the original.

Above, you can see the little critter I doodled in one corner where the edges seemed to suggest him. He’s smaller than a dime, and says pbth on your size issues. Below, speaking of size issues, you can see the piece in a frame with my iPhone, so you can appreciate the size it ended up.

After last week’s pair of Monster paintings, I decided to do a follow-up to start the week off right. This is, after all, the best perspective from which to deal with the adorable little pests. Once they’ve had a nap, I’m sure they won’t be quite so grumpy.

The clever among you will notice that it’s the artist holding the monsters. The persnickety will notice my part is on the wrong side, which is artistic license. And yes, I do have a nose in real life.

Above you can see the cranky cuties up close and full of meh. Below, I’ve put myself and my monsters behind glass, and Cthulhu himself came by to hang out. He’s got this sleeping thing down pat, after all.

No No No Monsters

No No No Monsters by Amy Crook

After sharing Wednesday’s Miasma of Monsters with my friends at the Starship, we all agreed that this trio was a big one for anyone running an ittybiz. First the raggedy, staticky fluffball of “No Energy,” then the red-eyed “No Time,” and their green friend with his unexpected sharp bits, “No Money.” Definitely a trio that demands attention!

I’m feeling a bit less poorly, myself, but still moving quite slowly when it comes to getting art done and ready to go, so you can expect updates to be a bit erratic until I’m all better. I’m just grateful for Tylenol.

No No No Monsters, detail, by Amy Crook

Above you can see the red glaring clock of the time monster, telling you to stop or go faster, or possibly both. Below you can see them in a frame, looking just as silly as ever.

No No No Monsters, framed art by Amy Crook

Miasma of Monsters by Amy Crook, 7″x5″ pen & ink and watercolor on paper

I swear, whenever I get sicky or ouchie my mood goes down with my physical wellness and I just feel uncreative and awful. Like my immune system is somehow responsible for keeping these critters at bay as well as the microscopic sort. I called this a miasma because that’s what their little cloud of doubt and blah reminded me of, a miasma that fills the mental air and makes it hard to see anything else.

My favorite is the guy in back, who is staring and not saying anything. You know what you did, his magenta evil eye says it all for him, though I’m fond of them all for one reason or another. The guy on the right looks like he’s about to erupt into a temper tantrum worthy of a 3-year-old, where the one on the left is very sternly lecturing you. He uses big words, I bet.

Painting them, I must admit, did help lift the miasma a bit. They’re just so cute!

Above, you can see my favorite monster staring at you. Always staring. Disapprovingly staring. Below, he’s still staring out of the frame, so you can see what these guys look like trapped behind glass. 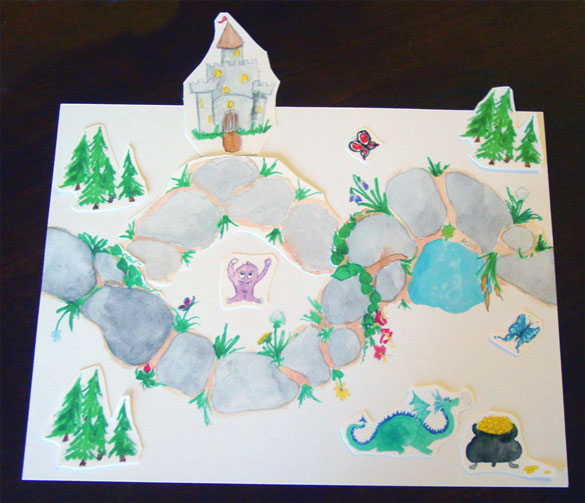