I have been thinking I might want to do some more ordered skies, rather than just the random dots I usually paint, but to be honest when I look up at the stars I mostly see… random dots. Thanks to the power of Google, however, I’ve brought you Cassiopeia done up like a prog rock album cover from the ’70s complete with groovy, glittery calligraphy. Fortunately, I know someone who loves the colors, the constellation and prog rock, so they know what they’re getting for Christmas.

The perks of hanging out with an artist, right?

There’s actually a fine layer of sparkly salt crystals mixed in with the iridescent red paint and the whiter glow of the moon on this, which you can only see in the sun from certain angles. This whole piece blends minimalism with bling in a way that amuses me greatly, so I’m glad it’s going to someone that’s already making grabbyhands at it. 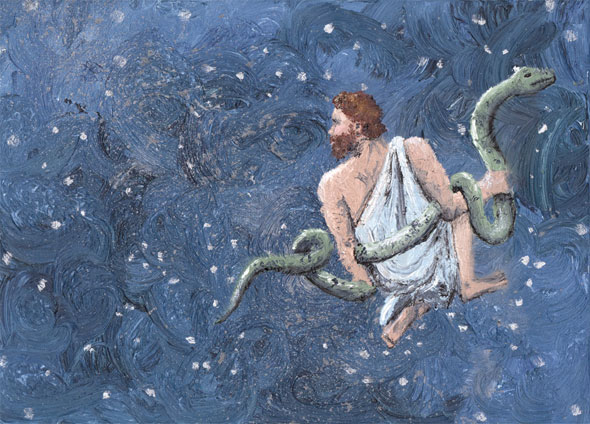 The second Starcycles Calendar I ever laid out was in 2001, and when Georgia asked for Ophiuchus on the cover, I decided to dive in with an oil painting. The image wrapped around the book, so the snake’s tail and field of stars were the back cover, while the figure was the main focus on the front.