This grumpy sea turtle is giving you the side-eye as he glides through the sunlit water. He’s no more pleased about how 2016 is going than the rest of us.

The ocean is a rich blue streaked with secret shafts of sunlight that only show up at certain angles. The turtle in contrast is all of soft, natural pigments, muted and almost ghostly as he glides through his world of water and light.

This tiny painting would be perfect on a desk or in a cubicle, giving people the side eye for interrupting your work.

The sunlight shines on the subtle interference blue paint, above, showing off the artwork’s hidden highlights. Below, this tiny painting is tucked away in a small frame, perfect for a niche, book nook, or small bit of empty wall.

This little cutie is swimming in clear blue waters, lit by the sun streaking down from above. His fins and shell are limned in golden light, almost melting into the sunbeams. The rich purpurite mineral paint blends beautifully with the artificial quinacridone gold to give the turtle an earthy feel in contrast with its watery environs.

Above, you can see his sweet little baby turtle face. Below, he’s swimming in his own little frame, just waiting to find his way home.

A bonus post! This little turtle was the predecessor to yesterday’s art, and when I was looking on the blog to link to him, I realized I hadn’t ever given him his own post.

I really like the splooshy-bright turquoise sea he’s swimming through, which makes me think of the Caribbean, especially the way his simple 3-color palette stands out against it. He’s done in the same gold and green as the third turtle, but with white for highlights rather than the purple shadows.

Above, you can see the details of his shell and determined little face. Below, the piece is in a tiny frame, all ready to add a splash of marine life to someone’s desk.

I love how his face came out, glaring defiantly straight out of the painting, full of confidence.

He’s entirely painted in three colors and with one brush, with a fourth color (and a different brush) for the background. His colors are mostly the earthy mineral tones of Primatek paints, offset by the vivid Quinacridone gold that’s in both the sunlight and the turtle.

Above, you can see his face and the expression of giving no fucks at all. Below, you can see him in his temporary frame, before he swam off to his new home. 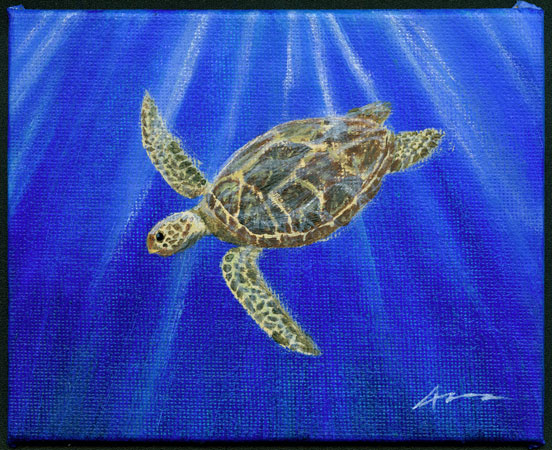 A few months back I held a contest on the Not Dead Yet Studios blog to give away one Cartoon, and one custom tiny painting. The very patient CaZ from 2 Chicks at Home won the painting, and it’s finally done.

She asked for a green sea turtle (which I was surprised to find after some Googling wasn’t particularly green), and so I went looking for reference photos and got started. Rather than using one of the tiny 2.75″ square canvases, I decided to go with a slightly larger canvas board to give the little guy some room to swim.

As soon as he’s dry enough, he’ll get packed up and shipped off to his new home. He was fun to paint, and I’m thinking perhaps I need to do another contest soon — though maybe this time for an existing work.

Read on to watch the turtle swim into being.