I’ve decided to do a new little line of Sherlock cards at my Etsy shop, which I hope you’re thrilled about, heh. I drew four painstakingly crosshatched corner designs, and then put together a card with one of my favorite quotes from the series. I’ve chosen one quote from each episode, making a total of six cards, which you can to buy in threes (by series, of course) or as a set of six.

Starting clockwise from the upper left, I’ve drawn Sherlock’s much-beloved scarf, curled around a pack of cigarettes which bear a skull and crossbones to indicate poison, or maybe pirates. Then there’s his ubiquitous magnifier, the design fudged a bit to make it more resemble an eye in its own right. It’s surrounded by deadly nightshade, a nod to Sherlock’s profession (and my cat, Belladonna). Down in the lower left, there’s also amanita mushrooms, which are quite poisonous indeed. A mysterious iPhone that might be pink were it not in black and white rests with two large, speckled pills and one shiny bullet. The last set, in the lower right, is Sherlock’s beloved skull (well, I say friend…), along with three books of mysterious origin, though I imagine the biggest one is the volume of fairy tales Sherlock found at a certain crime scene.

The quote above is from my favorite episode of Series 2, not perhaps the best objectively but the most fun by far, The Hounds of Baskerville. I love how Gatiss shifted the plurality from the original title (The Hound of the Baskervilles) and gave it a whole new, equally sinister meaning. I’m using the Sherlock page on Wikiquotes to get the phrasing right, so all mistakes in canon are totally theirs, wot.

Sherlock Quote Cards, 7″x5″ pen and ink on paper, original nfs. But feel free to buy the cards at my Etsy shop! 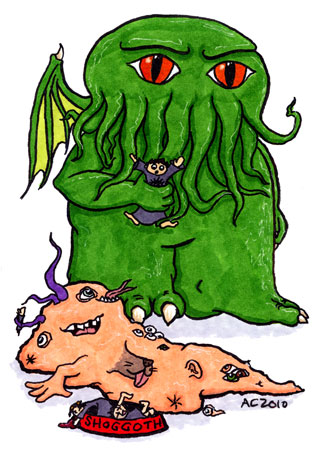 As promised, I’m reposting Weeble Cthulhu from earlier this year so he’s hiding in amongst my daily art for those seeking out my (so far rather small) series of Lovecraftian weebles. He’s got his pet Shoggoth with him with his bowl of cultist snacks and everything.

I made a greeting card out of him for Valentine’s Day that said, “Cthulhu wanted to give you a heart, but they were all too small and squishy.” They sold so well I took off the “Happy Valentine’s Day” and have left them up on the shop ever since.

Weeble Cthulhu, 4″x6″ pen and ink and Copic markers on a watercolor postcard.