There are two distinct layers to this painting, both filled with shining metallics. The copper in the back is marked and scarred like armor that survived a great battle, with blue glittery enamel filigree over the top, decoration that either came after the battle, or survived unmarked by whatever damaged the surface below. Or perhaps it’s a tracery of some magic used to preserve this artifact of past battles, won or lost.

Above, you can see the copper paint catching the light, the sparkle of the glitter pen and the salt interacting. The blue pen has picked up a slight green tinge in places from the color beneath it, and the metal ranges from a blushing copper to more golden to the green of tarnish in places. Below, you can see the piece in a frame, sunlight giving it a brilliant sheen.

This one-of-a-kind piece will be available in the Floating Gallery for July; you can join my list to get an early chance to buy.

Another foray into Victorian-style wallpapers with a limited palette, this piece combines loose brushwork with muted, complementary colors. The top copper shade is slightly iridescent, which adds a certain decaying glory to the erratic pattern. It makes me think of a design mouldering away in some abandoned Gothic manor house, the grinning skulls only adding to the haunted gloom of the place.

Above, you can see the light reflecting off some of the warm copper paint, which is at its darkest and most iridescent in the halos around each skull. Below, you can see the piece in a frame, hanging out on my desk with some other examples of scribbly, imperfect wallpaper.

Somehow all of my painted octopi end up looking a bit worried, as though they’re not quite sure how they ended up here in this painting and they’re definitely concerned that there will soon be a kraken. This little guy is painted almost entirely in shining metallic paints, the water in three shades of blue and the octopus himself mainly in a bright coppery duochrome adobe. His shadows and highlights are made of normal watercolor, but his eyes are the same shining blue as the water he’s swimming in.

Above, you can see the sunlight shining off of his distinctive copper skin and lovely sapphire-blue eyes. Below, he’s briefly occupying a frame and fretting about all the imaginary dangers of his empty undersea world. Perhaps you can take him home and let him take on a few of your worries as well, while he’s at it?

The inverse (and slightly smaller) companion to yesterday’s piece, Positive Space uses coppery paint and copper-colored glitter gel pen on black paper to create a halo of light around the spiral “stars.” I had actually created the salt pools on this one at the same time I did Monday’s Moonglow. I have two little pots of iridescent paint I got as samples, and I tend to use them on pieces at the same time, though rarely the same piece.

I liked the effect of Negative Space so much, however, that I took this work in progress and used the same technique to make a not-quite-mirror image. I like that they’re not exactly the same — the halos on this one tend to be bigger and scatter wider, and of course they’re different sizes. A bit like last week’s Spirals Trio, thematically linked but not matchy-matchy.

Randomly, if you ever get frustrated with the term “mixed media,” just check out the tags at the bottom of the post. I try to list all the media I’ve mixed down there.

The sunlight reflects beautifully off the copper-toned salt, ink and paint in the detail photo, above. Below, you can see the painting with my iPhone for scale. To see it beside its friend, check out yesterday’s post.

I really love how stark and simple this piece is. I was tempted to add more color to it, but in the end I think the copper moon and golden, salt-haoled stars are best on their own. In a simple black frame, it’s really striking, a slice of night for a desk, wall or bedside table.

Here you can see how the salt picked up a tiny bit of the iridescence from the paint, though mostly it sparkles all on its own.

This is the first of a pair of pieces I made together using Arches Cover Black paper. I love that this velvety black paper is fade-proof, because it’s not dyed but instead turns black from a chemical reaction set off in the paper. It’s art with science! Not my science, but still.

I made salt circles with my trusty orange pen, which barely picked up at all into the opaque white crystals this time. Then I used metallic copper watercolor for the ripples around each little pool, and copper gel pen for the signature, making an eerie monochrome piece very appropriate for the Halloween season.

Below you can see how the iridescent paint catches the light and glows with shimmery copper.

Here you can see just one salt pool, with the copper coating the salt on one side and making it look like it’s almost made of some strange metallic crystal instead of mundane salt. I’ve always liked how each little ring of salt is its own tiny henge of sorts, big crystals rising up around the scattered few in the center.

When the sunlight isn’t hitting them, the places where the paint was thinnest almost sink completely back into the black paper like ghosts, though it seems to float above the paper where it’s thickest. You can see it in its frame, below, with my iPhone for scale. 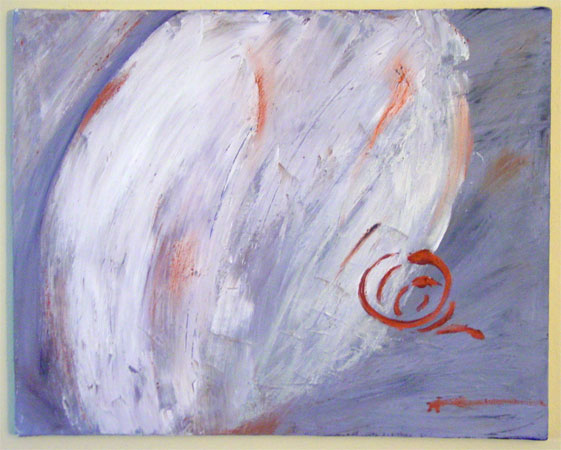 The touches of copper paint glow brightly in the photograph, as though the camera picked up the particles of shimmery metal in the paint.

Ouroboros was painted as another experiment, and is one of the abstracts I’m the most pleased with. The copper swirl of the snakes eating tails concludes with one escaping the endless spiral. The rough white shape on its periwinkle background calls to my mind a giant wing against a twilit sky, Quetzalcoatl overseeing his little cousins perhaps. The metallic paint highlights here and there throughout the painting in subtle and unsubtle ways to add dimension that goes well with the textured brush strokes.