The Hound of Tindalos is one of the most evil, annoying monsters to draw while playing Arkham Horror, and so of course I wanted to draw one being adorable. He’s playing fetch the cultist with Cthulhu! I’m sure the one he’s brought is only slightly chewed.

There’s not actually any real description of the hound in the books, it’s only called that because once it gets a time traveler’s scent, it will follow him through space and time like a hunting hound.

My idea is cuter.

Fetch the Cultist, 5″x7″ pen & ink and Copic marker on paper. You can get him in black & white in my Cthulhu Holiday Fun Book, or pick up the original during May’s Floating Gallery.

Join my Art Patron’s list for a chance to see (and buy) each month’s new art before the rest of the world. 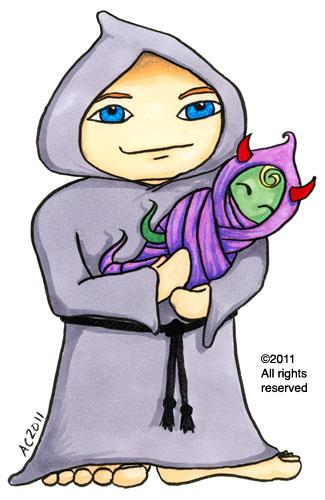 When my friend Bkwyrm approached me to ask about doing a logo for her new forum for parents with an occult bent, Parentes Nefarii, we tossed back and forth a couple of ideas. In the end, we decided that her budget and needs were best suited to a cartoon — but not of her. This weeble cultist (yep, Weeble Wednesday is back!) is carrying a rather dubious-looking baby, from tentacles to horns.

The innocent baby-blonde curl of hair really makes it for me, especially contrasted with the bald cultist and his bluer-than-blue eyes.

Nefarious Parent, 7″x5″ pen and ink and Copic Marker on watercolor paper, not for sale (commission). This, and all my other commissions, aren’t for free use per the Creative Commons license below — all rights are reserved for the commissioner*.

*And the Commissioner always has Batman on his/her side. 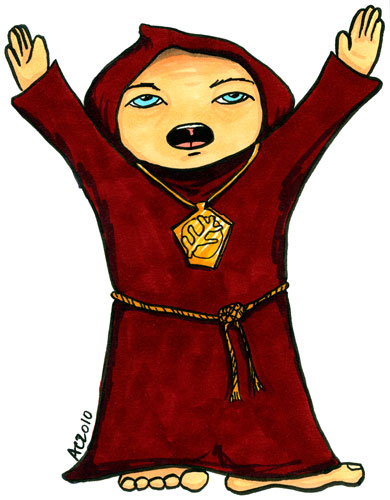 After doing all those other Lovecraftian monsters, I decided that one thing my coloring book needed was a proper hooded-robed cultist to worship them. He’s wearing the Elder Sign as sketched by Lovecraft (rather than the more star-like version used in Arkham Horror), and chanting in some sanity-rending ancient tongue in his attempts to summon Cthulhu, or one of the other Great Old Ones. Or maybe just a Shoggoth, who knows.

You can find him and a bunch of the monsters he’s trying to summon in my Cthulhu Coloring Book on Etsy, which you can buy either as a pdf or a printed book.