G is for Gothic

G is for Gothic, calligraphic illumination by Amy Crook

I have to admit, I went for the pun a bit here, combining the Gothic capital with my own Goth sensibilities. The silver spiderwebs are half-seen until they catch the light, and the burgundy G floats in murky gloom, hanging out with the stripey little spider responsible for its extra decoration.

G is for Gothic, detail, by Amy Crook

Above, you can see the silver details shining in the bright summer sunlight. Goths in hot weather, anyone? Below, it’s hanging out on a little shelf with the C and my collection of Endless pewter figurines.

G is for Gothic & C is for Counter, framed art by Amy Crook

A couple of people asked me about gift tags this year, so I took 5 of my favorite holiday cards and turned them into tags! They’re printed on parchment cardstock, with a hole punched for easy attaching. 15 cards in a pack, either all one thing or an assortment of 3 each, and shipping’s free.

You can pick them up at my Etsy shop during the holidays!

Friday is for fabric! At least this one is. I’ve created a line of fabrics over at Spoonflower called Scribble Goth, made up of scribbly skulls, spikey stripes and even one lone ditzy print of teeny tiny bones.

I haven’t made all of these designs available for purchase yet, because there’s a small but significant cost associated with doing so (it adds up!). If you’d like to buy one of these fabrics for your own projects, just let me know (comment here! contact there! email! twitter! whatever works for you, really) and I’ll buy a swatch for myself so you can get sewing. I’m even willing to make other colorways, if you’d like a blood red skirt or some Halloween orange pajamas.

I’ve also made a version of the above border that’s got the rest of the fabric covered in the polka dots below.

I’ve got a trio of stripes using the spikey cross from the border, though I only put two of them in the post.

And my favorite of all the patterns, a different sort of polka dot with the skulls arranged in florets.

Inspired by the same sort of Tim-Burton-esque design as Saturday’s Deplorable Figurine, this piece combines the fractal salt images with pen-and-ink drawing that was later softened with a wet brush.

Despite the fact that I no longer dress up much, my Goth tastes still permeate a lot of my life, from the Living Dead Doll in her coffin atop my bookshelf to the plethora of Nightmare Before Christmas collectibles around the house. I’ve always enjoyed things that make me say, “That’s so weird!” That sensibility shows up in my work sometimes, like today’s piece, not to mention all the zombies, vampires and other such cartoons.

The now-blue spirals started out as black fountain pen ink, but the water drew out the brown-gold portion of the ink, making golden haloes around the blue-grey centers. The effect gives them an odd glow where they attach to the end of the vines, though actually the vines were drawn in later.

I really think this detail shot I got is gorgeous, especially at extreme closeup – click on it (or nearly any image in my posts) to see it bigger!

I like the way the vines seem to grow out of the narrow black frame I found for them.

This morbid little doll started as a midnight sketch, just a few loose lines and the name scrawled on the page. It took me a few weeks to get back and fill in her tiny hands, stitched-together body, and the extra-creepy details on her face. Though I never went quite this far, I totally used to draw elaborate eyeliner designs on myself when I was an earnest young Goth. Ah, the olden days, when I gave a crap enough to wear makeup.

Deplorable Figurine, 5.5″x8.5″ pencil on sketch paper, not for sale. 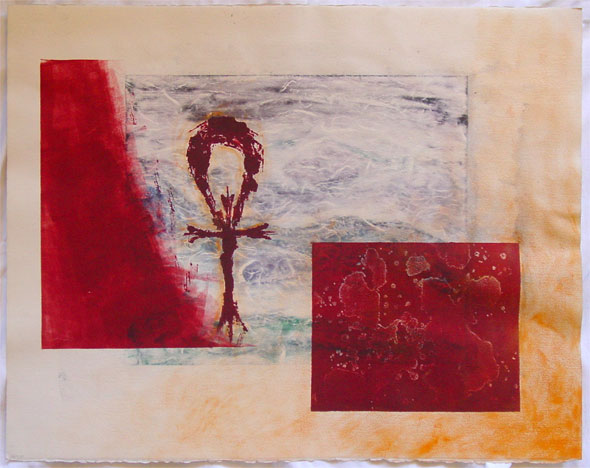