Although Zombie Heart is in keeping with the Halloween theme, there’s a gorgeous complexity to it that could live in the right home year round. The greens range from the darkest shadow around the main shape to the iridescence that floats above, shining like radioactivity.

The way the metallic greens bloom on the dark green core shape is like mold blossoming against decaying zombie flesh. The organic layers of shape and shade show an eerily beautiful side to this particular undead myth.

Are your favorite zombies created by magic, radioactivity, a virus, or some mad scientist?

Above, you can see the mysterious swirls and shimmers giving depth and texture to the painting. Below, it’s lurking in a frame, waiting to find a permanent home, lab, or specimen shelf.

I didn’t manage anything specific for Mother’s Day this year, but I have two cards for geek dads on Father’s Day. The first one was my Harry Potter art from February, and now I’ve got zombies to round out the selection.

I made the zombie kid somewhat gender neutral, so anyone can feel good suggesting that their dad would still play catch with them even if they were both to become the brain-hungry undead. And if you use a head for catch, then it’s a game and a snack after!

And here we’re back to coloring book doodles for Saturday, heh. Zombie Santa has a big sack of brains for the nice undead hordes. The naughty ones get shotgunned. 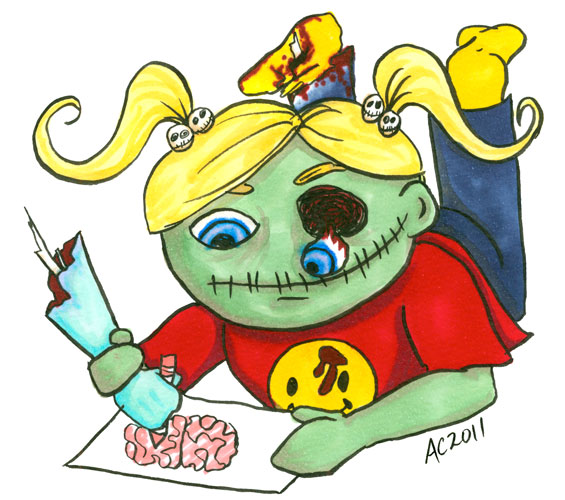 This is thus far the only piece of art I’ve actually finished for my Zombie Family Coloring Book project. Somehow, I just don’t have it in me to draw that many zombies in a row. Who knew?

Still, I’m very pleased with this girl, from her Watchmen t-shirt and bloody, matching socks to her very special crayon holder. Perhaps if I give myself a whole year, I’ll manage a book’s worth of zombies by next Mother’s/Father’s day. Heh.

Zombie Coloring, 7″x5″ pen and ink and Copic markers on paper, not for sale.

Do you remember Shrink Dinks? I had forgotten all about them until I ran across the Klutz Press book on them, which of course I bought, and then proceeded to store away for years with my art supplies. Well, today is the day they finally got put to use.

I used about 1/3 of a sheet for these guys, and wow, they got soooo wee. Seriously, I was somehow not expecting them to shrink quite so much, but I have future wicked plans for making more. Here you can see them with a dime for size comparison — on my screen, they’re actually larger than they are in real life.

Dark-colored Sharpies are still quite dark on the semi-transparent plastic, though you can see the colors clearly above with the lights shining through. I’m definitely going to have to experiment with some more of these, and then figure out how to price them and what for. Perhaps a set of ninja stitch markers? Zombie zipper pulls? Cthulhu on a cord for a necklace? 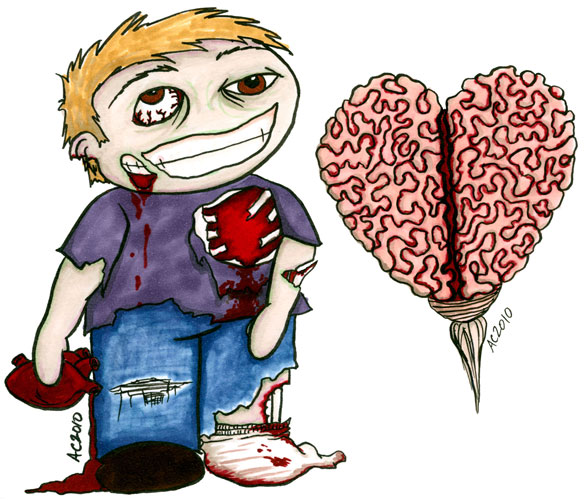 This charming fellow is another of the creepy cuties in my Monster Heart Coloring Book. His “heart” is a brain, which is a zombie’s real favorite thing, showing the real depth of his love that he’s willing to share. Of course, he’s got his heart in his hand as a spare, just in case brains aren’t your style.

Zombie 6 and Zombie’s Heart, both 5″x7″ pen and ink and Copic markers on watercolor paper. $129 for the pair in a double frame, with free shipping.