The beautiful Garnet Fox has a friend in this Blue Bunny.

Blue Apatite Genuine forms a lovely swirling midnight hue for the rabbit’s base color, with shimmering interference blue atop, and a glow of bronzite and quinacridone gold surrounding this lovely bounding bunny.

Larger than a lot of my work, this painting would be perfect in place of pride, matted into a silver frame in your home.

Above, you can really see the shine of the interference blue paint, which looks like moonlight atop the midnight blue. Below, this big bunny is in a frame, waiting to bring his shining light to your home.

This is a Motherfucking Bunny drawn by Amy Crook, $250

This bunny’s life is narrated by Samuel L. Jackson, he’s such a badass motherfucking bunny. He was drawn with my gorgeous but perpetually clogged fountain pen, which gives lovely scribbly broken lines. Then his ink was spread and smeared and turned from black to blue and brown and green and grey on the page, using a simple brush and water to affect the change.

Above, you can see the subtle shifts in color from blue to brown to grey, especially the nice navy blues in the shadows and soft warm greys around his face. Below, he has consented to occupy a frame for a short while so you can contemplate the magnitude of his attitude. 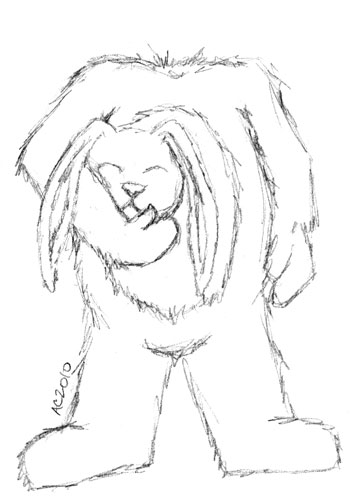 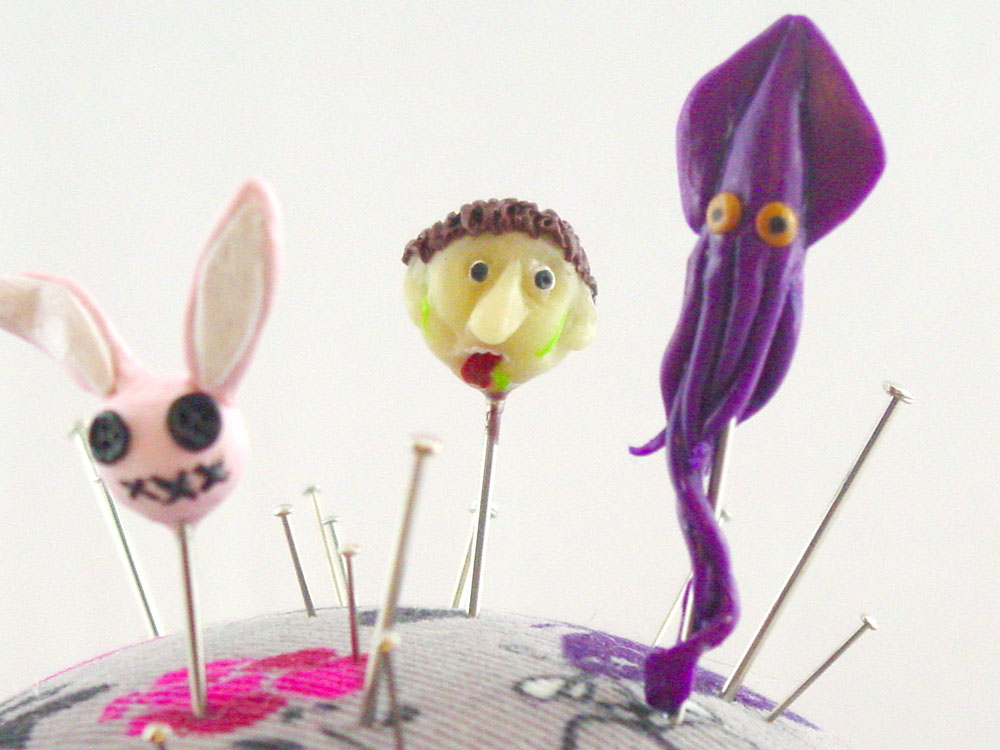 I saw some decorative pin toppers to spruce up people’s pincushions a while back, and I loved the idea, but somehow none of them quite fit my personality. So, I made my own!

The first one is a rather morbid pink bunny head, decapitated just to decorate your sewing box or pincushion. He’s got black button eyes and his smart mouth’s been “sewn” shut with some black polymer clay thread, so he won’t give you any sass. He’s made of polymer clay, fully cured and varnished with some acrylic paint accents. His head’s been mounted on a heavy-gauge 2″ steel bank pin, and he’s ready to decorate your sewing kit.

Next we have a glow-in-the-dark zombie head, decapitated just to decorate your sewing box or pincushion. He’s made of polymer clay, fully cured and varnished with some acrylic paint “blood” accents. His head’s been mounted on a heavy-gauge 2″ steel bank pin, and he’s ready to haunt your sewing.

The last one is a perky purple squid, with metallic gold eyes and ten tiny tentacles. He was painted with acrylic to give him a little dimension, and then given a shiny gloss varnish to finish it. He’s hanging onto a heavy-gauge 2″ steel bank pin, and he’s ready to add his personality to your sewing.

These are all a little bit fragile, so you won’t want to actually use them sew, but the zombie or bunny would make a neat tie tack or lapel pin if you could keep the pointy end from making a pincushion out of you.

The pincushion pictured was made by the wonderful Kirashapedgirl on Etsy.