Gifts of the Fairy Queen 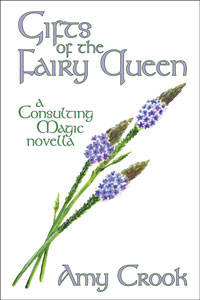 Consulting Magic has a new installment!

After the events of The Guardianship of Julian St. Albans, Alex and Julian take a few weeks to rest and recover before diving into the new challenges ahead.

This is a warm, domestic novella in the same vein as Rosemary for the Holidays, where we check in with our beloved characters but do not, for once, have a murder to solve. However, the Queens have seen fit to give gifts to our boys, and like all gifts from such personages, there are strings attached.

Read it on Kindle today!

In my first self-published novel, The Courtship of Julian St. Albans, the main character Alex whistles up some magic butterflies to impress the young man he’s courting. He also manages to acquire a flower fairy, though that comes much later. At no point would he actually put up with the coattails, though he is awfully fond of black with black and a side of black as his palette.

I drew this for Inktober in 2015, and colored it the other day as a warm-up to commissions. Because if I don’t do my own characters for FANbruary, who will?

It’s finally done! Paperbacks tba, I’m waiting on proofs in the mail, but for those of you who prefer them they’re on the way soon.

Julian and Alex want to begin building a new holiday cottage near the Magical Source on the St. Albans’ land, and working on a magical garden for their Guardian friends, but their plans for cozy domesticity are quickly shattered as Alex is called in to consult on a strange new murder case.

Julian is drawn into his own mystery when he is trapped by a curse. Alex and their friends have to rescue Julian, solve the mounting murders, and protect each other from the malevolent force clearly at work.

As Alex and Julian work together, their magics and their relationship grow and lead them down a mysterious and exciting path, introducing them to new friends they never could have imagined.

Untrue Love, the short story mystery-only prequel to my Consulting Magic series, is FREE through Tuesday on Amazon Kindle.

The Courtship of Julian St. Albans, the first book in this series of m/m romance, mystery, and magic, is on sale for a mere 99¢ through next week on Amazon Kindle.

Buy them today and enjoy!

The third book in my Consulting Magic series is imminent! This beautiful vine ring will be part of the cover, the same way that the mechanical bird graced the first one, and magical flowers the second.

Gold and platinum vines twine around each other, thick and thin, in a graceful and organic pattern. Bright emeralds dot the design here and there, cradled in little curls of metal so their placement looks natural.

It could almost be a circlet or crown rather than a ring, whatever your imagination desires.

Above, you can see the tiny green emeralds shining out of the curls of metal vinework. Below, the ring sits in a frame, waiting to decorate your home.

If you’ve read my novels, you probably remember Horace, the bronze sparrow created by the magical main character. He carries letters inside his hollow chest, and flies on the strength of spells written into every feather.

There’s just one color of ink in this bronze feather, covered in runes and imbued with magic — in the world of the book, anyway.

Before you hurt your brain trying to google the runes, they’re mostly made up, and a couple of them are even stolen from my fake Cthulhu alphabet. Why make new fake runes when old fake runes will do?

Above, you can see the ink-painted runes and bronze details of Horace’s feather. Below, it’s safely in a frame, waiting to float to a new home.