This bodaciously majestic Queen of Swords is a delightful take on the tarot card, with one hand raised up to greet her subjects and her sword held ready in the other.

She’s got little blue swords on her sleeves, and the green brocade of her underskirt is covered in arrows letting you know just where to kneel. At her feet. Where you belong. Everything about her expression tells you she’s completely confident in her ability to make you do what she says.

The amazing Sadynax gave herself a 30-day Marker Challenge last month, and I decided to do it for April to help get back in the swing of art after my surgery.

I managed to make art nearly every day this month (once I doubled up and skipped a day), and I can definitely see how I got back into using my materials as the month went on. I also got more energy to put into the finished pieces as my stamina returned, so hooray for healing!

Day 26: Use your favorite colors.

Day 28: Use only markers that end in the number 7.

Day 30: Redo a challenge you were dissatisfied with and compare the two pieces.

Sherlock needed some data about upside-down men, so he chose to trap his subject rather than asking.

Sherlock: It’s for an experiment.

Sherlock: I knew you’d never agree, so I set this up to get the data. The case depends on these results!

Sherlock seems to think that “it’s an experiment” excuses all sorts of reprehensible behavior.

This little comic is also a parody of the Hanged Man card in the tarot deck, though John’s legs are backwards from the traditional layout, and of course there is not usually an irritating detective measuring toes. I did keep in the usual primary colors, but swapped them around, giving John a red shirt instead of trousers, and putting the yellow shirt onto Sherlock instead.

You can send someone this delightfully weird comic on a card and make their day a little stranger, just buy one in my Etsy shop.

This little dude was the last thing I decided on for Sharpie Week, by having my houseguest draw a card from my Medieval Scapini Tarot deck. Then I looked at the intricate, complex drawing and doodled up something far less impressive in my wee sketchbook. King of Cups is the patron of artists, though, so I feel he won’t mind the license. 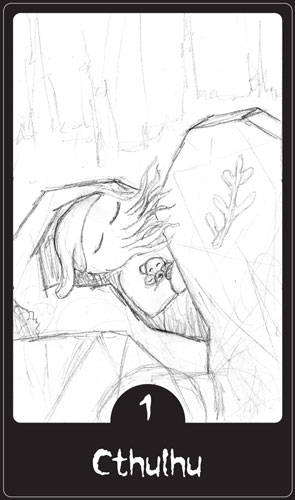 Progress is moving forward on my idea for a Cthulhu Divination Deck! I decided on a card size, a deck size, and got some price quotes. I’m planning to add some ornamentation to the card frame (and possibly change the layout a little), but this is the basic idea. So far I’ve decided that card #1 needs to be Cthulhu himself, and #42 (the last one) will be “The Stars are Right.” Now I just have 40 more cards to decide on. Then I’ll sketch out the art double the size it will be on the original cards, ink and color each piece, and somewhere in there I’ll put together stuff for the Kickstarter. 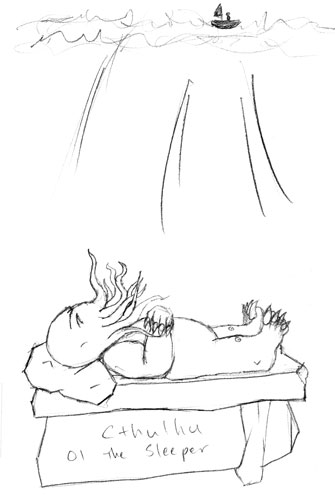 Since it’s been a while since I released my two Coloring Books, I want to get back to my original weeble monster love and do another Cthulhu project. This time, I want to make a parody divination deck starring Weeble Cthulhu and his other creepy cute pals. This is inspired both by my love of tarot cards (they’re like little packs of themed art!), and the completely awesome Fantod Pack by Edward Gorey.

I’m still making a lot of the basic decisions, but I made this sketch as a motivator for myself. I love how his tentacles float up in the water, and the weird angles on his altar bed, though I’m pretty sure I won’t bother to show the surface of the water in the final, just shade it to give sense of being below the depths. I just felt like drawing a tiny sailboat.

Stuff that needs to be decided (feel free to weigh in!):

I want to get at least half if not most of the art done before I even consider a Kickstarter, so that if/when it does fund it’ll be ready to send off to the printer very soon after. Having supported several Kickstarters now, I have to admit that the wait after funding is interminable, and the one that was ready for press right away and has already shipped to me has a very special place in my heart.

So, what do you all think, dear readers? Would you want to divine that you were destined to be detained by demons, tickled by tentacles or poked by psuedopods? Or have I lost too much of my sanity to be trusted?