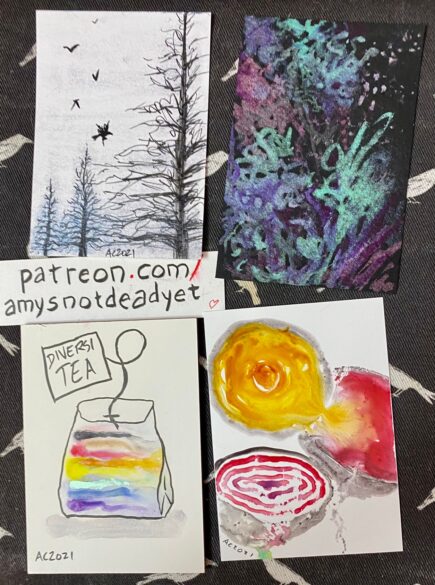 In the second installment of my misprint redux, I used a big fat Sharpie to darken the sky to black like my heart. There’s a soft brushing of iridescent watercolor over the whole sky, with twinkling stars of the same blue-green to add light to the deep black.

The bird got its own treatment, scribbled shadows to deepen its silhouette, make it more solid and less of a ghost. The whole effect is quite striking, much more dramatic than its predecessor, especially when the light hits it so the ink turns matte while the moon shines.

Is this the one that needs to fly home to you?

Above, you can see the dark scribbles bringing the bird more fully into the foreground. Below, a simple black frame holds this magical sky like a window into another world.

The amazing Sadynax gave herself a 30-day Marker Challenge last month, and I decided to do it for April to help get back in the swing of art after my surgery.

I managed to make art nearly every day this month (once I doubled up and skipped a day), and I can definitely see how I got back into using my materials as the month went on. I also got more energy to put into the finished pieces as my stamina returned, so hooray for healing!

Day 26: Use your favorite colors.

Day 28: Use only markers that end in the number 7.

Day 30: Redo a challenge you were dissatisfied with and compare the two pieces.

Palimpsest: something reused or altered but still bearing traces of its earlier form,
7″x5″ pen & ink and Sharpie marker on recycled artwork

This week’s word art is a request from Kim, one of my lovely Patreon supporters. As soon as I saw her request, I actually went and washed an old piece of art I wasn’t happy with, getting most of the paint off but leaving the ghostly blue world behind. Paper doesn’t recycle quite as well as parchment, but there wasn’t too much blurring with the strong Sharpie marker, though you can see some in the green vines on the upper left there.

If you’d like to see your own favourite word reinterpreted, consider becoming a patron! For a mere $5 you could get your request fulfilled.

Red Sharpie scales cover the entire page, showing through and informing the shapes of everything above them.

Dragons are often identified by their colors. Red and blue make purple, make violet. This dragon has fire in his eyes and ice along his belly.

Is his breath hot or cold? Is that smoke or mist curling from his mouth? Do those spikes cauterize as they pierce, melt the strongest armor or chill it to shattering, or neither, merely sharp, merely tipped in shining red?

Seemingly endless spiral scales are there to protect him, but as Neil Gaiman says, “dragons have one soft spot, somewhere, always.”

Above, you can see the sunlight reflecting off the iridescent sapphire of the dragon’s underbelly, and the way the red Sharpie spirals show through everything. Below, you can see the piece in a frame, just waiting for the perfect wall.

This isn’t really a detailed recipe so much as an outline of a recipe that you can fill in with whatever flavours you like. So far I’ve made a nice spicy curry, a lovely sage and oregano version, and a delicious sweet-savory Moroccan spiced stew.

As a disclaimer, I’ve been making and eating this mainly for the nutrition, so this is specifically an easy, cheap recipe that I can give variety to, freezes well, and is high in iron.

I have no idea how veggie-friendly it is, though I would assume very. I use meat to add protein and flavor, and I assume someone who didn’t eat meat would have something else they use for that purpose. Also, there are no onions in it because I hate onions, but you do what you like.

Brown the meat if it needs it, then add the carrots, lentils, flavorings, and broth/water. I found that about half and half made a nice rich soup without overwhelming whatever I was making with the broth. I used the instructions on the lentil package for how much liquid (and then added more for the carrots etc) and how long to cook everything.

I add the spinach near the end so it stays as happy little green highlights without dissolving into the broth, but still gets hot.

I serve this over brown rice when I’m feeling virtuous, or white rice when I’m not. It’s very filling, and as tasty as you make it. However salty it tastes in the pot, btw, the rice will suck a lot of that away, so I always end up taking a bit of extra salt to the table to make up for it.

The Floating Gallery has a name!

The Floating Gallery at Antemortem Arts arrives on the first of each month!

I got tired of not knowing what to call the little mini gallery shows I plan to have from the 1st-8th of each month, so I named it the Floating Gallery. The name is a reference to floating markets both real and imaginary, and so I obviously had to have a drawing to go with the name. I was inspired by drawings of dirigibles, pirate ships and of course Ronza*, and so I have an airship full of art coming in for a landing this Sunday.

I sent out my very first Patron’s List preview just now, with 6 new paintings (well, one’s a drawing, but you get the idea), 2 comics, and 6 new bookmarks. We’ll see what’s left when the Floating Gallery officially opens on the first! If you want your own peek behind the velvet curtains, you can join my Art Patron’s List here and get in early next month.

*I do realize only about three of you know who that is, just roll with it.