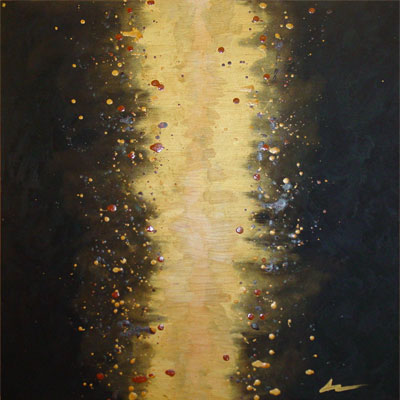 This painting was inspired by Roger Zelazny’s Amber series, in a roundabout way. In it he postulates a continuum of realities from the Pattern of Order at Amber to the Courts of Chaos at the other end, with the realities becoming stranger and more dangerous as they get closer to Chaos. I imagined a world where the sky had cracked open one night, its rough-velvet texture tearing down the middle and letting molten gold spill forth, sparking and changing and becoming like stars as it spread across the sky. I tried to capture that sense of motion, of chaos, with the three metallic colors of droplets (gold, bronze and a scarab red that shimmers and changes to old-bronze-green at certain angles).

This painting goes strangely well with my decor, when I hang it on the one darker golden accent wall the gold paint blends beautifully, while still stands out more on the lighter wheat-gold of the rest of the apartment. I keep wanting to frame it with an old window frame, so that it looks like you’re staring out a window at the glowing fissure in the sky. 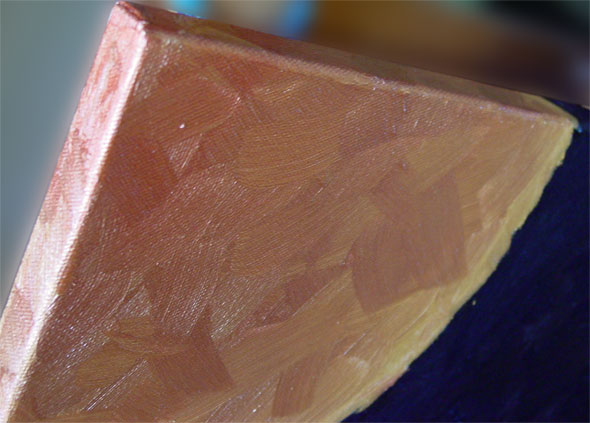 After finishing Molten Sky, I hung it up in my apartment to dry, and slowly got an idea for ways to make the single idea into a series. This is the second one, also 24″ square. For a long time it looked like it had a bite out of it and made me crave Oreos, but now I’ve finally got the metallic copper, bronze and gold filled in the “bite.” I’m not quite sure how I’m going to finish it off, but for now it’s drying in the same spot the other one occupied, where I can look up and see it and contemplate.