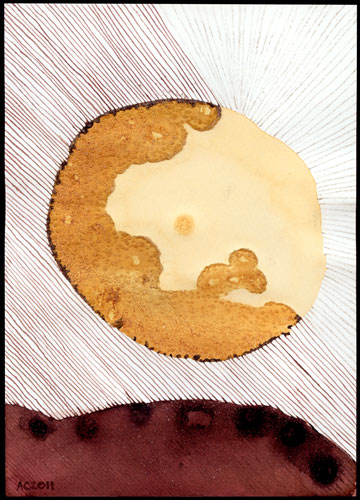 I couldn’t resist a punny title for this piece, after everything that went into making it. I was working away on doing the darker pen-and-ink shading in the background of the tea circle with a quill dip-pen and bottle of ink when I smacked the bottle and dumped it onto the drawing, the table, and a bit on myself. Fortunately I salvaged all three — the tablecloth kept it off the carpet, my pyjamas are none the worse for being a bit inky, and the piece, as you can see, took on a different quality afterward.

I put some salt crystals in the ink pool just to see what happened, and then once it was all dry I finished with the parallel lines radiating out from the salt-encrusted portions of the tea circle. Then, I got a metallic gold colored pencil to put in radial lines coming out from the lighter pool of tea, half-erasing them to give a subtle, distressed feel. One of the things I really like about the quill-and-ink section is that the metal nib actually scratches into the paper, so you can still see the texture of the lines even in the big pool of ink.

I think the final effect is of something rising up over hills, the sun half-under a cloud perhaps, or some alien moon somewhere. 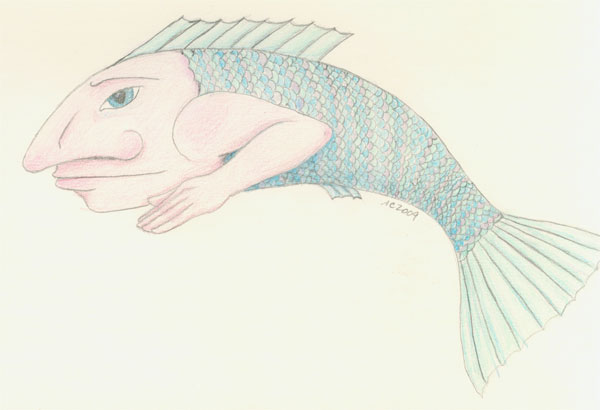 This piece was entirely inspired by reading Koldo Barosso’s wonderful blog posts on the process of creating an album cover. The flying fish with a man’s face stuck with me, and the image of this man stuck in my head until I got up late one night and drew him, coloring his scales on a couple of subsequent late nights, using some old colored pencils. Something about the shape of his nose, the angle of elbow and arm and hand against his fishy body called out to be brought to life, and I just couldn’t not draw him, once his image popped into my mind.