It’s dangerous to make comments about hobbits in the presence of Jo … she might go and commission some art for you.

This adorable comic is for a couple having a baby, who have been self-described as two dwarves who wish they were a hobbit and an elf. Thus, we have a dwarf-decorated crib with a hobbity dwarf on one side, and an elfin dwarf on the other.

Cuppa Confidence, commission by Amy Crook for Jo Van Every

Another commission for the delightful Jo Van Every! This time it was for her website, where we were trying to find a good visual metaphor for one of her services. I suggested the cup of tea, something calming and confidence-boosting, and added in the “confidence” on the tag in Photoshop later.

After a recent client meeting I realized that one of the things I do for people is help them feel more confident before a big thing. This particular client got short-listed for a job. We had a session before her interview. She hung up feeling more confident about what she could bring to that job, how to communicate that in the interview, who else she could go to for support, and how to ask them confidently. It may be a cliche but a picture is worth a 1000 words, so I talked to Amy about how to capture that outcome in an image and we came up with the Cuppa Confidence. Because tea makes everything better.

I was so inspired by this idea that I’ve started a little series of watercolors around this theme, and you’ll see Exuberance in this April’s Floating Gallery very soon.

Raptor, commission by Amy Crook for Jo Van Every

Jo’s commissioned a lot of things from me over the past couple of years, and this was one of the simplest, though it took some thought before setting brush to paper. She’d found this lovely image of a raptor diving out of its nest on a cliff that we both loved, and I wanted that feeling of the leap without burdening the image with too much detail.

This is what Jo has to say about it:

I recently restarted a yoga practice. Doing sun arms seems to summon an image of me as a raptor taking off from a cliff edge. Which is a wonderful feeling of freedom. I decided to commission Amy to paint it so I can have a reminder on the wall above my computer even when both hands are busy doing something else.

In or Out, Doctor Who parody art by Amy Crook

Peter Capaldi is most famous in England for his role as the foul-mouthed Malcolm Tucker in The Thick of It — or at least he was, until he got cast as the twelfth Doctor. We haven’t seen anything about him except his costume, and August refuses to hurry here, so this bit of Doctor Who fan art uses a quote from Malcolm’s mouth.

This art was a commission for one of my favorite patrons, but she’s kindly allowed me to put them on cards for my Etsy shop, so you can enjoy some sweary twelfth Doctor of your very own!

In or Out, Doctor Who greeting card by Amy Crook on Etsy

It’s Monday, and I think we all wish we could hop in and go back to Friday to enjoy the weekend all over again. The delightful Jo Van Every has gotten another fun illustration, this time of the “time machine” she uses to help get clients to think ahead. She wanted something colorful and whimsical, so I went for a Seussian version of the HG Wells creation. I’m not sure what all those big funnel-shaped things do, but I’m certain it’s timey-wimey stuff.

Interview with Jo Van Every

Jo Van Every is a sociologist, PhD, publications and all. She sees things differently because of that. She also asks questions that can help you see things in different ways. She’s learned that this way of seeing can help move projects forward. If you’re feeling stuck and frustrated in your academic career, she might be able to help.

Over the past couple of years, Jo has commissioned several illustrations to use with her academic consulting practice. She’s here to talk about what she got and why.

Q: Why did you decide to get commissioned art?

A: I recognized that images can add a lot to blog posts, presentations and other work that I do. However, I struggled with finding suitable images. Commissioning art seemed like a good way to get images that really fit what I was trying to do. 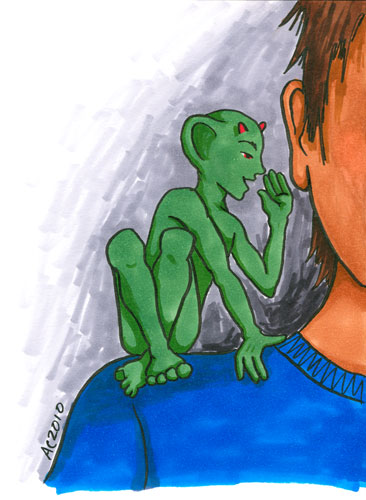 Q: How do you incorporate these illustrations into your work?

A: I think the first illustration I commissioned was a gremlin. I started out using it in blog posts but then I realized that the un-inked version could be used with clients as a colouring page. Later illustrations, like the fairy godmother were commissioned with that in mind. I’ve used them for workshop exercises and in one-on-one work with clients. Having cartoon-ish illustrations and colouring pages can help clients articulate ideas that may not be developed enough to go in a grant proposal, for example, but that help me help them write better grant proposals.

Q: What did you hope an illustration would add to your ittybiz?

A: My initial hope was that they would help me communicate better because I was using both images and words. As I used them more, the illustrations have added fun and playfulness to the work I do, too. One of the things I want to do for my clients is help them reduce the stress they feel around their work and fun is one way to achieve that goal. I decided to commission an image of myself for my about page to really foreground that sense of fun.

Q: How did the process work from your end?

A: I am a very word-y person. One reason I struggle with finding suitable images is because I have trouble articulating what I really want. I worried that it would be hard to communicate what I really wanted. The process was actually much easier than I expected. You helped me figure out what I wanted and sent a few sketches with some questions to help me clarify my ideas. Sometimes I took a while to respond because I didn’t feel confident that I knew what to say and you gently nudged me along. I would recommend that people build that into their timelines. I really needed time to look at the sketch and then ponder it in the back of my mind for a bit before I could comment on it.

Q: Have you had any unexpected awesome from your cartoons? How do clients respond they first see the illustrations?

A: I must admit that I was worried that my clients, many of whom are university professors, would find them too silly. I have been surprised at how well they respond. Some of my clients went out and bought coloured pencils so they could colour in colouring pages I sent them! Others described to me in words how they saw the image in colour in their head.

The other awesome thing is that although I mostly use digital versions of the illustrations, you sent me inked originals. I have framed these and have them on the wall of my office where they inspire me daily.

Thanks so much for answering my questions Jo, it’s always delightful talking to you!

If you’re interested in commissioning an illustration for your own business, you can check out the details here. Each of Jo’s illustrations only took 1 hour of billable time.

If you’re interested in a cartoon of yourself (or someone else in your life) there’s a Be A Cartoon special just for that!

Rules Gremlin by Amy Crook for Jo Van Every

I’m afraid this Tuesday is tentacle-free, which is probably against one of the many rules on this Gremlin’s parchment. He’s another commission for Jo VanEvery to use in her work — she’s promised to post about him and yesterday’s cartoon soon, so keep an eye out! I found the first sketch for this in my photos recently (I take iPhone photos to show a client their sketches rather than scanning them, to save a bit of time), and I was amused to remember that he’d originally been tall and skinny. We both liked his scroll so much that I kept the overall height, and instead added some books to stand on and made him wide and squat instead.